The Assyrian King Assurbanipal (669-626 BC) engaged in a dramatic lion hunt. This is an imaginary scene based on the bas-relief shown above which was found at Nineveh, the ancient capital of the Assyrian empire. 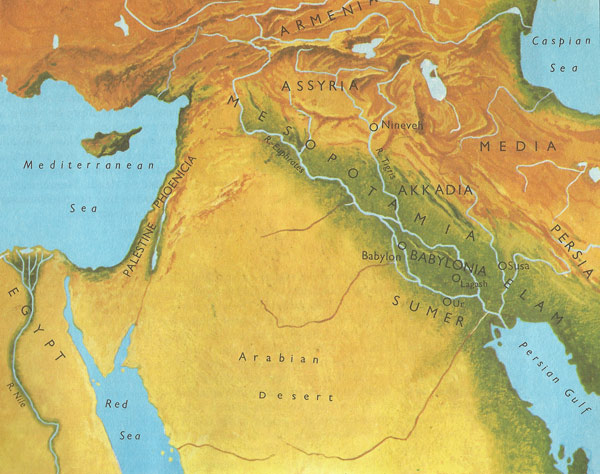 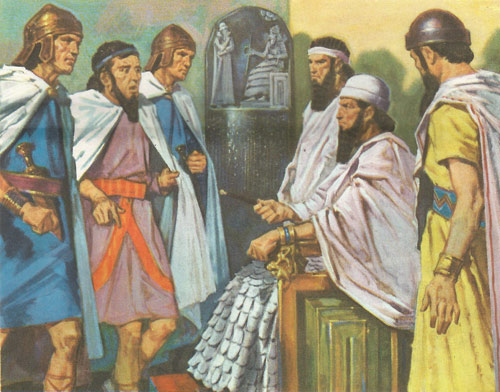 The Babylonian King Hammurabi administers justice; in the background is his famous black law stone. 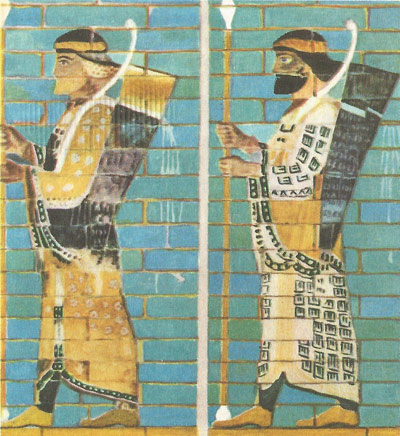 A tiled frieze of Persian warriors found in the royal palace at Susa, in Persia. In 539 BC the Persian army attacked and defeated the last Babylonian empire.

Civilization seems to have be en born in China. There, 4,000 years before the birth of Christ, a highly advanced civilization already flourished. Gradually it spread westwards across the Asian continent. But not for over 3,000 years did it reach Western Europe; in about the third millennium BC it had come to a full stop in the Middle East. Here its two most important centers were the great rivers the Nile and the Euphrates, and for thousands of years the Egyptian and Babylonian civilizations were the greatest in the world.

Mesopotamia – 'the land between the rivers' – is the ancient name given to the whole district enclosed by the Tigris and the Euphrates, the home of what has come to be called Babylonian civilization. The area falls naturally into two parts: very low and flat in the south, rocky and mountainous towards the north. Two separate empires were to grow up in these areas: Assyria in the north, and Babylonia in the south. These two were constant rivals; first the Babylonian, then the Assyrian, and then once more the Babylonian empire dominated the great Mesopotamian plain.

Mesopotamia was one of the most favoured regions of the ancient world. According to tradition, it was the Garden of Eden, home of Adam and Eve. The extraordinary fertility of its rich alluvial soil, aided by vast irrigation projects, enabled the people of Mesopotamia to live a settled and prosperous existence. In this atmosphere of security and plenty, the arts of writing, of law-making, and of building developed. Mesopotamia became the home of a civilization unparalleled even in the cultured world of Asia Minor.

But its extraordinary richness caused Mesopotamia to be fought over not only by Assyrians and Babylonians, but also by outsiders – Hittites, Egyptians, and eventually by the Persians who finally absorbed it into their great empire in 539 BC.

The earliest Mesopotamian empires were founded by the Sumerians and Akkadians in the southern part of the Tigris-Euphrates plain. They were centered on such city-states as Ur, Lagash, and Akkadia, but gradually extended their rule to include all the districts that were to become Babylonia. The Sumerians evolved the wedge-shaped or cuniform style of writing, worked out a system of figures, and built the first rounded, soaring temple towers or ziggurats which were to be a feature of Babylonian cities as long as they endured. The Akkadians were Semitic people who probably came out of the Arabian Desert and settled just north of the Sumerians. Their great King Sargon (2350–2300 BC) conquered all Babylonia as far as the Persian Gulf to the south, the borders of Elam to the east, and the country west of the upper Euphrates right to the Mediterranean. Towards 2000 BC this empire was destroyed by a mountain people from the east, the Guti. A period of civil war and chaos followed until finally the whole of Mesopotamia became united under the Sumerian rulers of Ur. The Sumerian empire now entered its last and greatest phase. The whole empire was organised on a centralised basis directed from Ur. Fabulous temples were built, and it was now that the marvellous irrigation system of canals was constructed. But after a hundred years of prosperity Sumer was overthrown by the Elamites. They never settled the conquered land, which was soon overrun by two Semitic states, Isin and Larsa.

In about 1800 BC King Hammurabi united the kingdoms of Isin and Larsa and, moving his capitol to Babylon, became the first king of Babylonia. His 43-year reign was the golden age of early Babylonian civilisation. The city of Babylon, on the Euphrates, now became established as the capital of the empire; its city god, Marduk, was acknowledged as supreme above all other gods and goddesses of the empire, and it became a flourishing trading center. Much of our knowledge of Hammurabi's reign comes from his code of laws, which has been found inscribed upon a huge black stone at Susa. These laws give us a picture of a very active community, in which trade was of enormous importance. Dishonesty in buying and selling was one of the many crimes punishable by death. Hammurabi is revealed as a just and capable, if severe, ruler; it is interesting that the punishments were much harder on the rich than on labourers, merchants, and workmen.

Hammurabi reigned for 43 years. Shortly after his death, the first Babylonian empire was destroyed by waves of invaders who greedily eyed the empire's wealth during the strong rule of Hammurabi. These invaders – Hittites and Hurrians from Syria, and Kassites from the Zagros mountains – were barbarians compared with the cultured Babylonians, and the balance of power in Mesopotamia shifted to the Assyrian empire in the north. The Assyrians gradually enlarged their empire at the expense of the great southern kingdom. Assurnasipal, the first great Assyrian king, determined to dominate Asia Minor and campaigned as far afield as the Mediterranean coast. He was an utterly ruthless warrior, and under him the Assyrians gained a lasting reputation for cruelty. The new empire rose to the height of its power under Tiglathpileser lll (who was the first Assyrian to be crowned king of Babylon) and his successors; Shalamaner, Sargon ll, Sennacherib, and Assurbanipal. These rulers held all Asia Minor in thrall. They pitilessly destroyed the great city of Babylon and flooded it by diverting the Euphrates. Not only Babylon, but all the Syrian states submitted to them, and the Israelite kings paid tribute. From her capital, Nineveh, on the river Tigris, Assyria ruled to the Egyptian border, to the Annemian mountains, and to the Persian Gulf.

But the Assyrians were not just a race of warriors. Their kings used the wealth plundered from defeated countries to build magnificent palaces. Their triple arches were models for the triumphal arches of Rome; their large-scale sculpture foreshadowed Roman statuary. The last great Assyrian king, Assurbanipal had a vast library of 22,000 clay tablets that he collected from innumerable religious, scientific, and literary works of past ages. His library was discovered at Nineveh and part of it is now in the British Museum.

Assyrian domination lasted well over 500 years before it was overthrown. The Babylonians had gradually become stronger and were finally able to turn the tables and conquer their northern neighbour. In 612 BC King Nabopolassar of Babylon combined with the Medes of attack Nineveh which they razed to the ground. The Babylonians were again masters of Mesopotamia. But King Nabopolassar's dynasty, which held power for less than a hundred years, was the last period of Babylonian prosperity and glory.

Nabopolassar's son, Nebuchadnezzar, conquered Syria and Jerusalem, and took many Jews back to Babylonia. He was a great builder and completely transformed the city of Babylon; the famous ziggurat, known to the Jews as the Tower of Babel, dates from his reign, and the legendary Hanging Gardens of Babylon, one of the Seven Wonders of the World, may also have been his work.

But the dynasty collapsed shortly after his death. The last king of Babylonia, Nabonidus (556–539 BC), spent most of his reign campaigning abroad in Arabia, while Belshazzar, who was possibly his son, acted as regent in Babylon. The days of Babylonia's glory were past; contemporary poems lament the decline of the great empire and blame unworthy rulers for neglecting both their gods and their duties. Nabonidus was criticized for forsaking Marduk and making the moon-god supreme in Babylon. By 539 BC the Babylonian empire had so degenerated that Cyrus, king of Persia, decided to attack it. Belshazzar was defeated at Opis. Babylon collapsed without a struggle, and the king Nabonidus was deported.

So ended the independent history of Mesopotamia, Which now became a province of the Persian empire. Although Mesopotamia was to become a battleground, fought over for centuries by Persians, Greeks, Parthians, and Romans, the people kept alive their ancient customs and traditions until, in the 7th century AD, the conquering Arabs imposed their Muslim religion and culture. Finally, when Mongols destroyed the irrigation system in the 13th century, the region became poor and arid desert land.