Nansen's ship, Fram, has risen above the ice and has begun to drift north. Members of the expedition are making scientific observations. 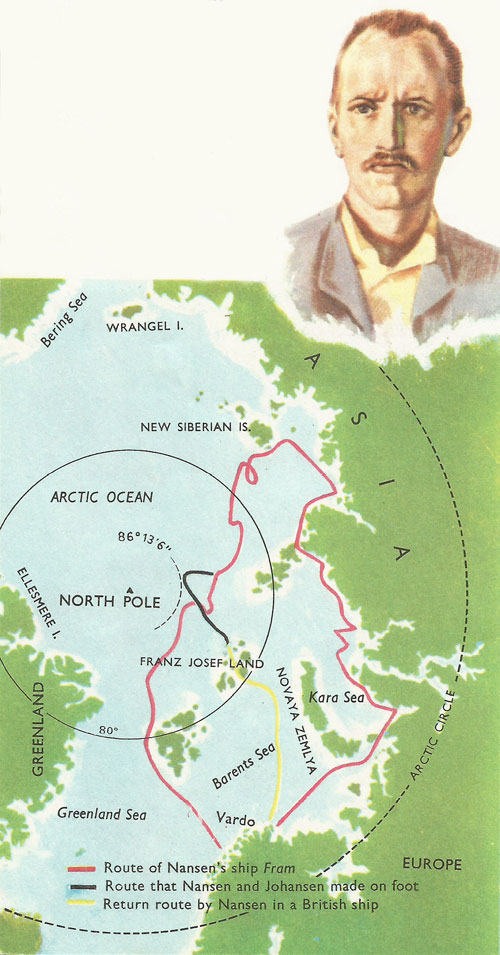 Nansen at the time of his Polar journey.

Nansen and Johansen drag their sledge on the journey back.

Imagine a ship designed to sail among the great northern ice packs, with a hull that is two feet thick and shaped in such a way that when the ice closes in upon her she is squeezed up – like a cake of soap in your hand – and rests on top of the ice. Such a vessel was built toward the end of the nineteenth century to fulfil a bold and imaginative plan of the great Norwegian explorer Fridtjof Nansen. He had discovered a piece of larchwood that had drifted all the way across the Arctic Circle from Siberia and thought that if a piece of wood could make the journey then he, too, could drift across the Arctic Sea in a ship, so long as it rested on the ice. And so the Fram (which means 'forward') was built.

In June 1893 Nansen set off from Christiania – now called Oslo – with a crew of 13 men and 30 dogs. Many people considered his scheme crazy and said that he was going to his death. By September the From had reached Cape Chelyuskin, the most northerly point of Siberia, and soon the ice became 30 feet thick and began to close in on the Fram. Just as Nansen had expected, she rose up, perched on top of the ice, and began to drift. For a year she drifted northward, then slowly westward. Nansen then decided to make a dash for the North Pole, with his companion, Hjalmar Johansen. At that time no explorer had yet reached the pole.

This was nearer to the Pole than any other explorer had ever been, but with temperatures plunging to 40 degrees below freezing point, with their dogs exhausted, and with their clothes freezing on their bodies, they knew they had to turn back. The two men and their dogs travelled for four months through the ice and snow. Frozen, desperately tired, and with sinking spirits, they struggled on through mile after mile of the wild, white wilderness.

Once, Nansen was nearly killed by a bear. On another occasion, their kayaks, which they had moored to an iceberg while they had climbed up to make observations, broke loose and began to drift. Nansen knew that they would not be able to continue without them, and so he dived into the freezing water, still wearing his heavy furs, and swam after them. Then, after they had got toe kayaks back again, Nansen's kayak was attacked by a huge bull walrus and nearly destroyed. At last, they reached Franz Josef Land, still within the Arctic Circle, and decided to spend the winter there because it would have been foolhardy to have pushed on in the face of a Polar winter. They built a hut of stone and covered it with walrus hides and then settled down for a long, cold wait. They spent the winter hunting, talking, and writing, and in this way they kept themselves sane.

In May, when spring came, they set off again on their march southward. A month later, at what must have been almost as strange a meeting at that of Stanley and Livingstone in Africa, they walked into a British party, the Jackson-Harmsworth Expedition, which had been in the Arctic for two years and was now awaiting the arrival of its ship. The vessel duly arrived and took Nansen and Johansen back to Norway in triumph.

But what had happened to the Fram? There had been no word from her, and her movements were as much a mystery in Norway as those of Nansen and Johansen had been. Astonishingly, a week after Nansen's return on the ship Windward the Fram drifted back to Norway – three years after she left. Nansen was given a hero's welcome and so were the men in the Fram. In fact public opinion was so stirred by the bravery of everyone on the expedition that the vessel was preserved and can still be seen outside Oslo. Nansen has described some of his experiences on that journey in a book called Farthest North, which is partly based on diaries he kept during the three years he was away.

In it he tells of the scientific observations he made, of the camp on the ice built for the dogs, and how he thought up ways for the crew to keep themselves occupied so that they would not begin to brood and be overcome by melancholy, one of the most dangerous emotions that can attack a Polar explorer.

Nansen paved the way for modern exploration in the Polar regions. Amundsen, Shackleton, Scott, and even recent explorers like Sir Edmund Hillary and Sir Vivian Fuchs owe him a great debt. He is also the perfect example of a man whose vision and imagination were ahead of his times. When he first suggested that a vessel could drift across the Arctic Circle he was severely criticized by other Arctic explorers, and many people disapproved when the Norwegian Parliament voted to pay two-thirds of his costs.

One person who had no doubts was Nansen's wife. She had great faith in her husband's ability, and when the little 4,000-ton Fram sailed away from Norway on that June day in 1893 she stood on the quayside keeping back her tears so that the wives of the other expedition members would take courage from her example.

Fridtjof Nansen was born in 1861 at Store Froen, which is near Oslo. As a boy he had the keenest interest in sport and outdoor amusements. He developed into a first-class athlete and skier.

He first experienced Arctic conditions in 1882 when he joined the sealing ship Viking for a voyage to Greenland. There he saw the great ice-cap which dominates the country and his imagination was stirred. Six years later he returned to Greenland and crossed it on foot from east to west. He had to stay there during the winter, and he spent it at the Eskimo village of Godthaab. Afterwards he wrote a book called Eskimo Life which was based on his observations of the inhabitants of this village.

But before this journey he had already begun to make a name for himself in academic circles and was appointed Curator od Zoology at the Bergen Museum.

After his great expedition in the Fram he was appointed professor at the Christiania University. There he became interested in oceanography – a study if the physical geography of oceans – which became his special interest.

As he grew older, Nansen became more and more interested in people and nations. He worked hard for Norway's independence from Sweden, and later, when this had been achieved, he did great work for the League of Nations by helping victims of the First World War. In which Norway herself had remained neutral. He ran the Nansen Relief Commission which helped to get prisoners-of-war back to their homes. In 1921 he organized aid for victims of the great Russian famine.

He will always be remembered for the Nansen Passport – a passport sponsored by the League of Nations for refugees who has lost their own nationality. His work did not go unnoticed or unrewarded, and in 1922 he was awarded the Nobel Peace Prize.

In 1930 he planned to spend his 69th birthday flying over the North Pole in an airship, but in the same year, before he could carry out this ambition, he died at the age of 68. He was without any doubt, one of the greatest men Norway ever produced.