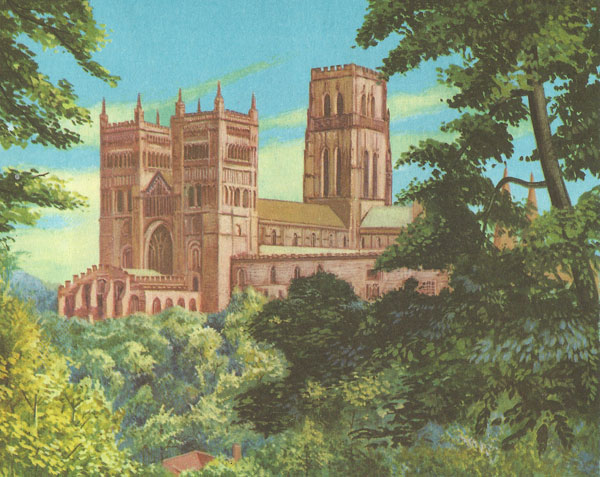 Durham Cathedral is a fine example of Norman architecture. 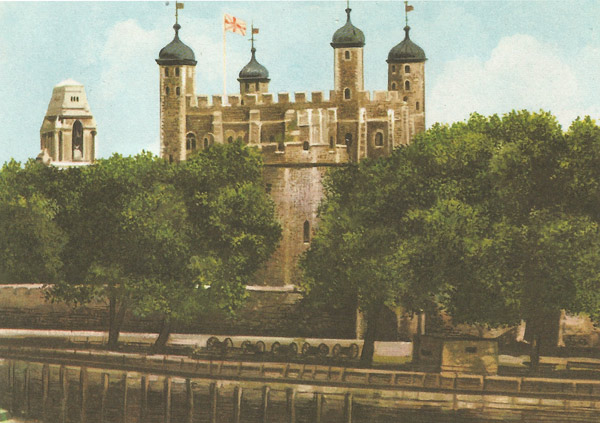 The White Tower of London is one of Britain's best-known Norman buildings. 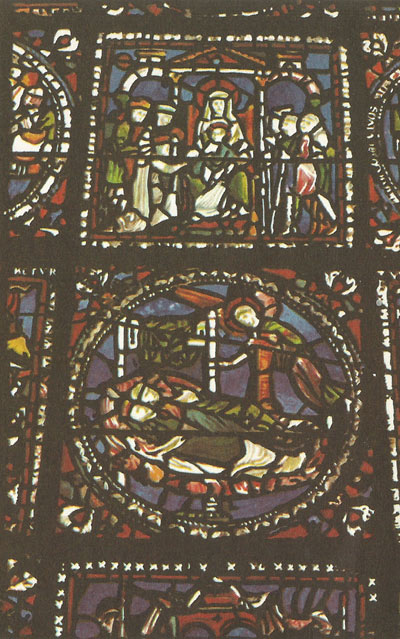 This is one of the stained-glass windows in Canterbury Cathedral. The top section shows the Adoration of the Magi. The lower section shows the three kings being warned in a dream by an angel not to return to Herod. The glass dates from the 13th century.

The Normans, who conquered England in the years following the Battle of Hastings in 1066, were great builders. Their conquest of England was not only a military conquest. It was the victory of an architectural style, which we can still see today in many great cathedrals, parish churches, and castle ruins.

Norman architecture had actually been introduced into England by Edward the Confessor; his admiration for everything Norman was well known, and when he gave orders for the abbey of Westminster to be rebuilt he saw to it that Norman style and Norman methods should be adopted. Although this style has usually been known in England as Norman, a better name for it is 'Romanesque'.

Romanesque literally means like Roman, and it is true that the Normans were only developing, in their own duchy and in England, a way of building which was being used all over western Europe and which had many points in common with the style used by ancient Romans. Indeed, this style was often copied fairly closely, for the remains of Roman buildings were widely scattered over the lands that had once been part of the Roman Empire. Some of the features of this Romanesque style can be seen in one of the most magnificent of all Norman buildings in England, Durham Cathedral.

Before the Norman conquest Durham was a famous shrine, for it contained the bones of St Cuthbert, one of the best-loved of all the English saints. It was the seat of a Benedictine Abbey, and in 1093, its second Norman abbot, William of St Carileph, laid the foundations of the abbey church which still stands today.

Like most great churches of that age, it is shaped like a cross, with the altar at the east end. The limb of the cross, to the east of the intersection is called the choir. It was blocked off from the rest by a screen, and within it the monks celebrated their services. The two shorter limbs of the cross are called transepts, and they contained a number of small chapels. The long western limb is called the nave. From west to east, the whole building is more than 400 feet long.


Construction of a cathedral

It is obvious that the main problem of architecture is to construct a building that is wide enough for the needs of the users, which has a roof across its width, and which will not fall outwards, through the great weight of the roof. The walls must be strong enough to withstand this great weight, but, if the building is to have any light, they must be pierced by windows.

Long after the Norman period, medieval architects were able to build churches whose walls were very thin and whose windows were very large. They did this by ensuring that the weight of the roof was concentrated on certain pillars along the walls. A building like King's College Chapel in Cambridge, for example, seems from the outside to be mostly composed of glass. The Normans had developed nothing as elaborate as this. They managed to carry some of the weight on huge pillars, but very thick walls were still necessary, and the windows had to be small.

In the early years of their conquest the Normans kept England down by sheer military force. Their army of occupation was only a few thousand strong. They had to cope with no rebellion organised on a national scale, but nevertheless it is remarkable that this small number of knights and men-at-arms was able so quickly to consolidate the victory gained at Hastings. One of the reasons for this achievement was the skill they had in building castles, the like of which England had never seen before.

The castle in the Middle Ages was not just a defensive position to which a group of men could retire and make a stand. It acted as a barracks, from which soldiers could make punitive raids on the surrounding countryside and thus make authority respected. It acted as a seat of government, as a prison, as a storehouse, and, in the event of attack from ill-disposed neighbors as a place of refuge for the local population.

Within twenty years of the Battle of Hastings there was hardly an English town of any size without its attendant castle. Without them it is doubtful whether the Normans would have been able to make good their conquest of England. Until the conquest the only sort of castle the English knew was a mound surrounded by a ditch. Such a stronghold could not last long against a determined attack.

The innovation of the Normans, however, was the stone keep, sometimes enclosed by a curtain wall, sometimes standing on its own. To begin with, it was square or rectangular, like the White Tower of the Tower of London. Later round towers were built. These were less vulnerable. The walls of the towers were very thick, ant there was little attackers could do to bring them down, though methods of attack were developed in the East during the Crusades which were often effective, such as undermining and the building of wooden towers which, when brought up against the walls, acted as large scaling ladders. Such methods took a long time and were very expensive to use successfully.

The White Tower of London is very spacious inside. There are a large chapel, a great hall, and quarters for the garrison and lord. Over a hundred London houses were pulled down to make room for it.

In the twelfth century in Western Europe it was the custom to fill the windows of the greater churches with stained glass. The colors were very deep and rich, and they were seldom applied evenly to the glass. The glass itself was thick and uneven in quality. The general effect of the twelfth-century windows was thus dark and heavy, and they must have made the interior of the churches very dim. But now, with their colors softened by the wear of centuries, they are beautiful.

In England hardly any of this twelfth-century glass survives. The best collection is in the choir of Canterbury Cathedral. This is the oldest stained glass in Britain. One of the most famous windows is in the north choir aisle. It shows the heathen being converted from the worship of idols and being led by the figure of Christ to the altar of a church. In the surrounding border are letters which describe the scene, but few people of those days could read, and on the, no doubt, the pictures in the glass would have had more effect than a score of sermons.