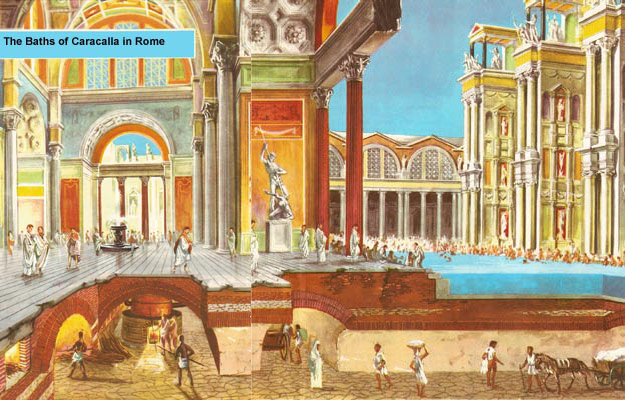 A sectional view of a hall and a swimming bath in the Baths of Caracalla. Notice the magnificent decoration, marbles, stuccos, fountains, and statues. The elaborate baths of Rome covered an area of up to 30 acres. 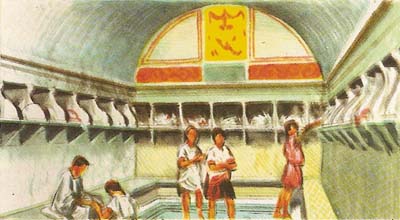 Apodyterium or waiting room where clothes were also left. 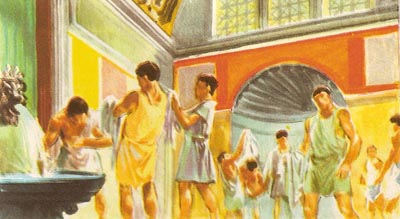 Calidarium – a room for hot baths, massaging, and washing.

The civilization of the Romans has left us with many great architectural works as evidence of its power and greatness: walls made of huge blocks of stone, very long aqueducts, magnificent temples and tombs, baths, arenas, huge theaters, triumphal arches, bridges, and roads.

Among these works, there is one whose full range of uses it is difficult for us today to realize. We find it hard to imagine the life which went on inside or the way in which the building was constructed, because it is a type of building which no longer exists – the famous Roman baths.

Why did the Romans need a whole building for nothing but baths? How were these baths built and how did their elaborate plants work? How did people spend their time inside? Our answers to these questions are based on the ruins of the buildings, on objects which have been found in them, and on pictures and writings of that period.


How a Roman citizen passed his day

However rich a Roman citizen was and however elegantly he was dressed, he spent very little time on his personal hygiene when he got up in the morning. He went to bed almost fully dressed and as soon as he sprang out of bed he was ready to go out.

In the whole of Pompeii a wash-basin has been found in the bedroom of only one house. Since soap did not yet exist, anyone who was really keen on washing the sleep out of his eyes merely plunged his hands and face into cold water.

But we shouldn't think of the Romans as people who cared little about their cleanliness. On the contrary, they devoted significant parts of their day to the baths, to gymnastics, and to the care of their bodies. They preferred to give up the middle hours of the afternoon to these matters and so gave them an importance greater than that which we typically attach to them.

As at that time there was no really efficient way of providing light, the Romans tried to take every possible advantage of the hours of daylight. So everybody, rich and poor, masters and slaves, got up at dawn and went about their business at once. For the same reason they usually went to bed fairly early in the evening. So that in a Roman day everything took place, as it were, earlier than it does in the life which we lead now. The morning was very long and in the course of it everybody got through everything which had to be done, while in the afternoon which corresponded more or less to our evening, the time was devoted to rest and pleasure. This is why plays in the theaters and games in the arenas began in the afternoon and why Romans of the Imperial age usually spent their afternoons at the baths, just as people of our day may spend their evening leisure at a club or at the cinema. Having spent the morning supervising the work of their slaves, or going into their business accounts with the slave responsible for them, or performing their duties in some official capacity, or trading in the Basilica, or discussing political questions in the Forum, Roman citizens took themselves off to the baths in the afternoon. There, besides taking baths and doing physical exercises, they also passed long hours in conversation and discussion about politics, philosophy, literature, and art, and also in relating and listening to all the latest gossip.

At the baths, even in the most corrupt of their civilization, the Romans tried to live up to the old maxim: "mens sana in corpore sano – a healthy mind in a healthy body.

Inside the colossal Roman baths, which could accommodate thousands of people at the same time, were found restaurants and the shops of tonsores (barbers), perfumiers, and druggists.

Besides this there were beautiful gardens with fountains and flowers, covered ways in which to walk, and libraries and halls for meetings.

Beneath the imposing Baths of Caracalla in Rome a whole network of underground corridors has been discovered. These corridors are wide enough for two carts to pass side by side, and open spaces are provided in which the vehicles may turn round. Through manholes in the floors of the baths it was possible to load up underground convoys of carts with soiled linen for the baths. The baths were also supplied in this way with all the necessary washing and cleaning equipment and with wood for heating purposes. Without such an arrangement all these goods would have had to pass through the crowded and luxurious halls above.

Above ground, the main components of the baths were as follows.

1. Principal entrance (to the men's part of the baths).

2. Apodyterium. This was the group of rooms set apart for undressing. Clothes were placed in the pigeon-holes provided at eye-level but as they could not very often be locked up a slave had to be left to guard them.

3. Sphaeristerium. This was an open-air gymnasium where people wrestled after anointing themselves with oil and wax, or fenced with wooden swords, or amused themselves with ball games such as trigon or arpastum.

4. Meeting rooms for the players. In the larger baths there were also small, heated rooms called sudatoria (Latin sudar, sweat) where people came after taking physical exercise so that they would perspire still more.

5. Calidarium. This was the main part of the baths; a huge, well-lighted room where the visitors came from the gymnasium to anoint, wash, and dry themselves.

They used special oils to anoint themselves and then scraped their bodies clean with curved instruments called strigils. Slaves were often employed to help in this or else special attendants were paid to do it. Very hot water spouted from a fountain where one could have a thorough wash. In the calidarium of the larger Roman baths there was also a swimming-pool which was filled with very hot water.

6. Tepidarium. In this room, where the temperature was lower (Latin tepidus, lukewarm), bathers coming from the calidarium waited for a while so as to reduce the temperature gradually before they passed on to the cold bath.

7. Frigidarium. Having heated his body and opened his pores by means of the hot bath which he has just taken, the bather now plunged into the cold water of the swimming pool in the frigidarium. The powerful effect on the circulation of the blood produced by these alternating hot and cold baths was mainly responsible for the health-giving effects of the whole treatment.

9. Additional small tanks, not much more than three feet deep and probably reserved for important people. Even the Emperor Hadrian liked to go to the public baths but he preferred to mingle with all the other visitors.

11. Entrance to the women's department.

16. Hypocausis. In this room were stationed slaves who stoked the fires which heated the water and rooms. Under the floors of the various rooms lay a honeycomb of flues about 2 feet high and logs burning in these heated the rooms through the floor itself. In this way, too, fire passed under the various pools and tanks where hot water was required. Hot air from these flues rose through a system of terra cotta ducts behind the plaster ad, having warmed the walls on its way, passed out through the roof.