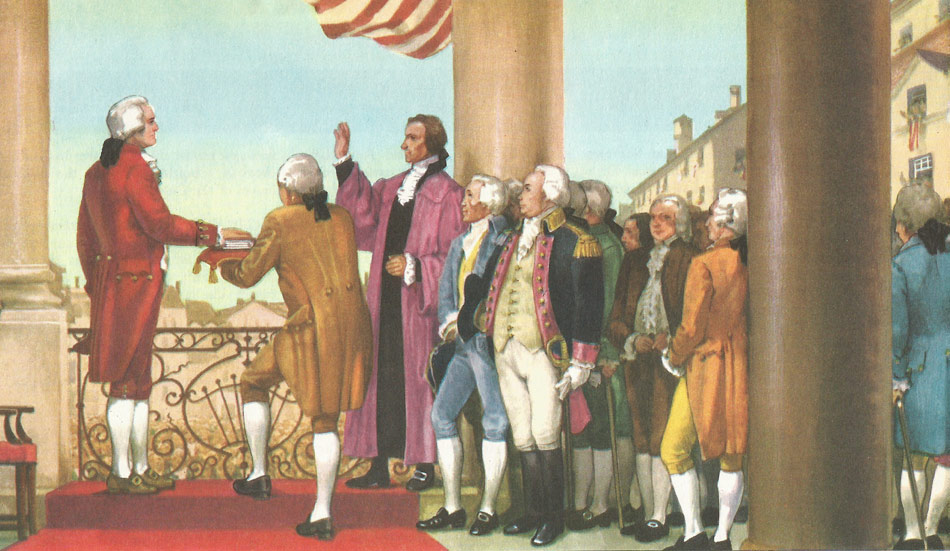 First President of the United States on the balcony of the Federal Hall of New York on 30th April 1789. 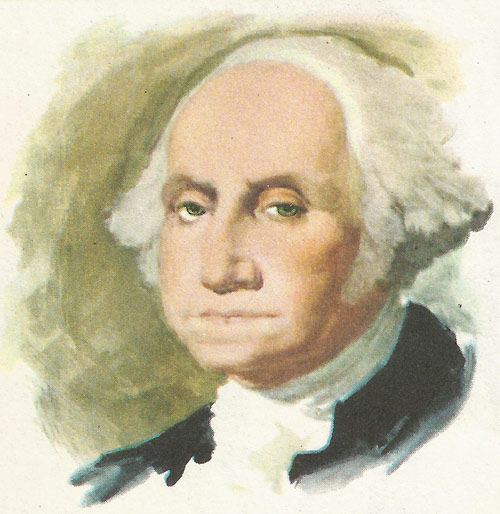 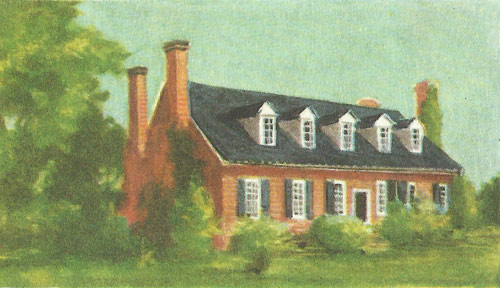 Wakefield, in Virginia, where Washington was born. 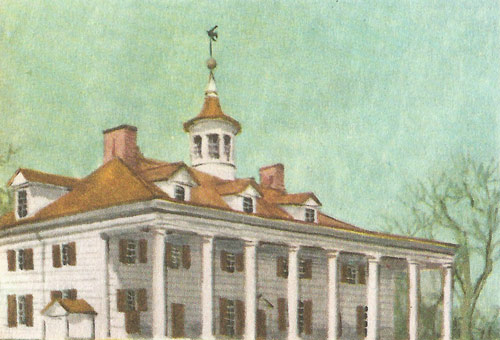 Mount Vernon, Washington's home where he spent most of his life.

The heading of the special copy of the Declaration of Independence which was hand-lettered on parchment and signed on 2nd August 1776. 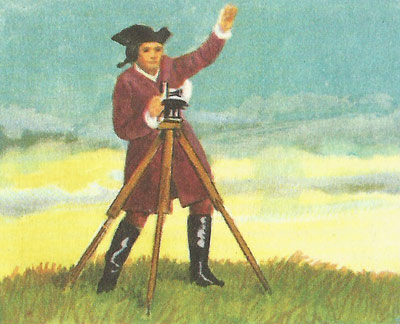 The young Washington started making surveys at the age of fourteen.

George Washington, the founder of the United States of America, is one of the most important figures in history. His name is revered by all Americans as the father of their country. And yet Washington was not really a very gifted or interesting man. We have all seen pictures of that strong, stern, gloomy face with its large jaw. He was not particularly well educated and was not fluent either with his tongue or with his pen. But he had a quality which was much more important than any intellectual or literary gifts – and that was character. Washington had a noble character; he was fearless and resolute in carrying out what he believed to be his duty, and for this reason his fellow-Americans automatically turned to him as their leader. After his death it was said of him that 'he was at war, first in peace, and first in the hearts of his countrymen'.

George Washington's great-grandfather came to Virginia from England in the middle of the seventeenth century. He acquired about 6,000 acres of Virginia plantation lands. George's father, Augustine Washington, had been a naval captain. He was athletic and led a healthy out-of-door life, running his farms and estate. George was born on 22nd February 1732 at one of his father's plantations in West moreland County, but he spent his youth at another plantation called Ferry Farm on the Rappahannock River.

Augustine Washington died when George was only twelve years old; George was a child of his second marriage and his property was left to his two eldest sons, Augustine and Lawrence, who were George's half-brothers. Lawrence had inherited a plantation on the Potomac River, which was named Mount Vernon.

George did not receive much of a formal education during his childhood. In the Virginian society of those days is was considered more important to learn to ride well and to acquire a thorough knowledge of farming and estate management. George was very methodical and hard working; he taught himself mathematics and spent hours healing with the business side of the running of his brother's plantations. He filled up many ledger books with a neat hand and was very good at making maps and diagrams. When he was sixteen he was given the job of making a survey of vast, unexploited tracts of land belonging to Lord Fairfax, a cousin of his brother Lawrence's wife. He did this with conspicuous success, and a few years later he became the official surveyor of Culpeper County.

Because of his valuable training in the wilderness, George was mad a lieutenant-colonel in the Virginia militia and was sent on an expedition against the French, who were building forts on the Ohio River. Later, when General Braddock was sent to fight the French, George was made his aide. The expedition was a disaster and the unfortunate General Braddock was killed; George, however showed great courage during fighting and, at the age of twenty-three, he was made a full colonel and commander-in-chief of all the Virginia forces.

At about this time Lawrence Washington died, leaving George his plantation Mount Vernon. In 1759 he married Martha Custis, a rich young widow, who owned 15,000 acres of land near Williamsburg, the Virginian capitol. Their combined fortunes made him one of the richest men in America. Their marriage was a long and happy one. They had no children of their own, but Martha had two children by her first marriage.

For 15 years George Washington led the life of a gentleman farmer at Mount Vernon. He was a member of the House of Burgesses, the Virginian parliament, and was active in local life. His passion was farming; he corresponded with naturalists all over the world and was one of the earliest scientific farmers. He believed in rotating his crops, which was not thought necessary in a country where land was so plentiful.


The War of Independence

Washington was sent as a delegate to the first Continental Congress in Philadelphia in 1774. At the second Continental Congress in 1775 he appeared wearing the uniform of the Virginia militia as a sign that he was willing to fight against the British. By this time war had broken out and the 13 colonies had to appoint a commander-in-chief. At the Congress Washington was unanimously chosen. There could have been no better choice; with his energy, decisiveness, and authority, Washington was born to command. His noble and majestic manner frightened many people. A London paper said: 'There is not a king in Europe that would not look like a valet beside him.' He had those qualities which are essential for a leader: grandeur of mind and force of character.

As commander-in-chief Washington had a very difficult job. His men were badly clothed and had no sense of military discipline. They were unshaven, talked in the ranks and treated their officers as equals. 'Each of them acts like a general and not one of them like a soldier,' said Washington.

The war dragged on for several years. In 1781 the British surrendered at Yorktown. Washington's great achievement had been to hold together a weak, disorganised force against all odds.

At the end of 1783 the army was dismissed; Washington resigned as commander-in-chief and returned to Mount Vernon, hoping to spend the rest of his days there. But he was needed more than ever by the new republic; the 13 independent colonies were not united and there was no constitution or central government. There was a great danger of anarchy, with power being seized by the masses. In 1787 a convention met in Philadelphia to draw up a constitution and Washington was made its president. After the constitution had been ratified by the necessary number of states, Washington was unanimously elected the first President of the United States. He took the oath in New York on the balcony of the Federal Hall in April 1789. The government then moved to Philadelphia, where it remained for 10 years while the new capital, Washington, D.C., was being built.

Washington served two terms (eight years) as President. He refused to be president for a third term and was succeeded by John Adams. He could only enjoy his retirement at Mount Vernon for two years. One day in 1799 he went for a long ride over his farms and was caught in a snowstorm. He caught a chill and died a few days later, on 14 December, at the age of sixty-seven. He was buried at Mount Vernon.