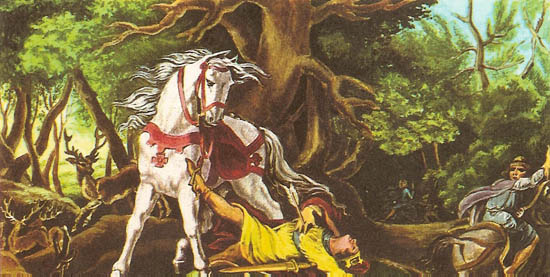 When William the Conqueror died in 1087, an English chronicler, living in Peterborough, wrote one of the most glowing obituary notices ever given to an early English king. But when, in 1100, his son William Rufus (the Red) was killed in the New Forest, the chronicler's tone was very different. "Through the counsels of evil men, who were always grateful to him, and through his own greed, he was always tormenting this nation with an army and with unjust taxes. . . . He was hateful to almost all his people, and odious to God, as his end made clear."

But the writers of these early chronicles were almost all monks; and if a king did not please the Church, they were inclined to forget what might otherwise have been said in his favor. William Rufus thought little of the Christian religion, except when illness and the fear of death turned his mind to what might lie waiting for him beyond the grave. For most of his life he looked on the Church first and foremost as a very useful source of income for him, because he took the revenues of vacant bishopries and abbacies. Like most of his family, he thought first of his pocket.

It was this very concern with money, however – infuriating though it was to his victims – which helped to make him, as it did his brother Henry who followed him, an effective ruler. In order to fleece his subjects he had first to rule them and see that they obeyed his officers, and this William Rufus did very well.


The barons and the Church

His reign began with the usual outbreak of rebellions. The death of a king gave the barons of the 11th and 12th centuries a welcome opportunity for settling private quarrels and making life difficult for his successor. The Conqueror's three sons had each been given part of the inheritance – Robert, the eldest, had Normandy; Rufus, England; and Henry, a sum of money. None of them was satisfied, and for many years the brothers squabbled over the spoils. This was a wonderful opportunity for the barons, and a rebel could usually find support from one of the Conqueror's sons in defiance of one of the other two. Rufus, however, showed great energy and skill in putting down these rebellions, and by defeating the rebellious bishop Odo of Bayeux he earned both the support and the gratitude of many English peasants who had nothing to gain from such uprisings. William also knew how to attract powerful followers, and he could be as generous with money when he had got it as he was greedy in getting it. Unemployed knights flocked to him from all over Europe, because he promised them a carefree and profitable life with plenty of hunting and a reasonable amount of fighting. He was determined to throw his brother Robert out of Normandy, so that he could rule both territories as his father had done. This was made possible, without the necessity for painstaking and expensive sieges, when Robert decided to pawn the Duchy to free himself for the Crusade in 1096.

William never succeeded in overcoming the opposition of the Church to his blasphemies and his way of life. The Conqueror's friend, Archbishop Lanfranc, died in 1090, and to the fury of churchmen, Rufus decided to do without an archbishop. The see remained vacant until in 1093 Rufus fell seriously ill, and thought it advisable to appoint another archbishop. The obvious candidate was Anselm, the abbot of Bec, a learned man of great charm who was renowned throughout Europe for his writings and for his friendless to all he met. When he recovered from his illness Rufus had reason to regret the appointment, for Anselm's charm did not spring from weakness and he quarreled incessantly with the King. In 1097 Anselm left England and Rufus was dead before he returned.


The death of William

Rufus's strange death was, to the chronicler, a sign of divine anger. Nobody knows exactly how or why it occurred. On a hunting expedition in the New Forest in the summer of 1100 he was killed by the arrow of a fellow knight, Walter Tirel. Some years later, William of Malmesbury vividly described the scene:

After dinner he went into the forest, attended by a few persons; of whom the most intimate with him was Walter, surnamed Tirel, who had been induced to come from France by the liberality of the." During the hunting "Walter conceiving a noble exploit, which was while the King's attention was otherwise occupied to transfix another stag which by chance came near him, unknowingly, and without the power to prevent it – oh, Gracious God! – pierced his breast with a fatal arrow."

So Rufus died. Was it an accident? We shall never know. But there was no doubt who gained. Henry, the Conqueror's youngest son, rushed to Winchester to seize the treasury whose increase had been the dead King's chief work for 13 years.