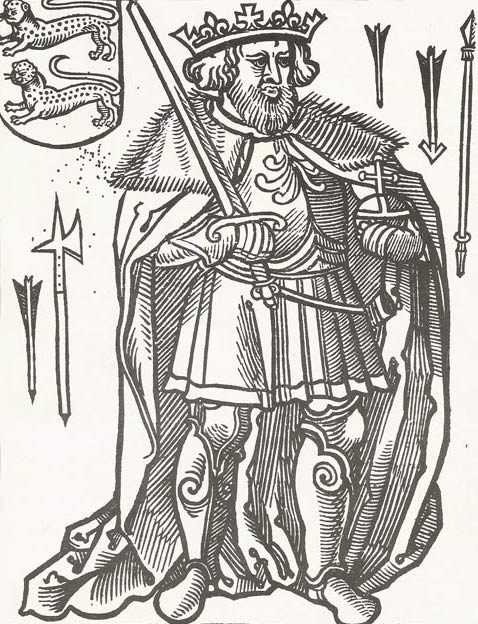 Harold returning to England in 1064, having sworn to support William's claim to the English throne. 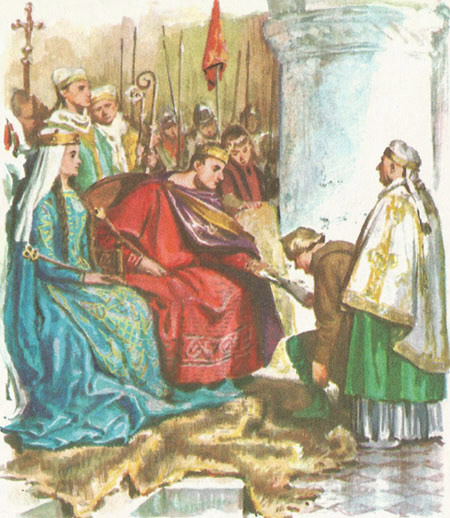 William as administrator. Beside him sits his wife Matilda.

William the Conqueror, sometimes known as William the Bastard, began and ended his life in France. The illegitimate son of Robert the Devil, Duke of Normandy, and Arletta, the daughter of a tanner at Falaise, William was nevertheless accepted by the Norman barons as his father's successor. Having survived several years of anarchy, he was successful in 1047, at the age of 20, in assuming his position against an attempt to overthrow him. By this time he had already shown his gift for war and government, which was stand him in good stead later on in life.


The conquest of England

In 1051, William paid a visit to England, during the course of which he received from his kinsman Edward the Confessor a promise of the English throne. Two years later he strengthened his claim to the English crown by marrying Matilda, a daughter of Baldwin V of Flanders, who traced her descent through the female line to Alfred the Great. And then, in 1064, Harold Godwinson, later, Harold ll of England, was shipwrecked on the coast of Normandy. He was only allowed to go free on condition that he swore to support William's claim to the English throne.

When Edward the Confessor died in January 1066, the English Witan (council of wise men) elected Harold as King of England. On learning this news, William determined to make Harold give up the throne in his favour. Having secured the blessing of Pope Alexander for his mission, he set about getting recruits. Although his barons were not enthusiastic at first, William managed to win them to his cause by means of various threats and promises.


The Battle of Hastings

William assembled a fleet, which is said to have consisted of 695 large vessels supplemented by numerous boats and wherries – a total of 3,000 craft of all kinds. Taking advantage of a favourable wind and the absence of Saxon ships from the Channel, William transported an army of about 7,500 men and a great number of horses from St Valery to Pevensey, on the Sussex coast, on 28th September 1066. The Normans encountered no opposition when they landed because Harold was up north of the country.

This was a result of a useful alliance which William formed with Tostig, Harold's embittered brother. Tostig invaded the north of England in company with Harald Hardrada of Norway, allowing William to land unmolested in the South. Although Harold defeated Tostig and his allies at Stamford Bridge, near York, he was obliged to hurry south immediately to repel the Normans.

William had by then constructed an entrenched camp at Hastings, but he moved his forces eight miles inland to the Ridge of Telham in order to attack Harold's army, which took up position on the hill of Senlac. On 14th October the two armies met. William's Normans were victorious, after a battle lasting all day, during which Harold was slain, probably by an arrow that landed in his eye. On Christmas day 1066 William was crowned King of England in Westminster Abbey.

The years that followed were devoted to putting down Saxon rebellions, parrying raids by the various Scandinavian peoples, and subduing the Welsh and the Scots. He punished rebels by confiscating their property. It was partly with this property that he rewarded his European followers for their help in the conquest of England. But William the Conqueror, as well as being a military genius, also proved to be a competent statesman and administrator. Two constructive measures by which he is remembered are the compilation of the Domesday Survey, and the oath that he extracted from his vassals at Salisbury in 1086. By means of the Domesday Survey he was able to ascertain and divide up every landholder's liability to taxation and military service; by the oath he saved England from the worst evils of the feudal system by making all Lesser Tenants, as well as the Tenants-in-Chief, swear allegiance to him personally – no matter to whom they also owed allegiance.


A religious and just man

William was a strongly religious man and greatly improved the Christian standards on the English Church. When choosing abbots and bishops, he is said to have paid more attention to their holiness and wisdom than to their riches and power – an unusual trait in those early days! He also protected his humbler subjects from baronial oppression. His aim was to establish such peace in the land that any man, whatever his station in life, could walk without fear of being attacked and robbed. William decreed that no man should kill another, no matter how severely he had been wronged, and that punishment should be carried out by the proper authority.

But although William maintained his English possessions successfully, his lands in Normandy were frequently menaced by French soldiers. In 1087William went over and retaliated by destroying and sacking the town of Nantes. As he surveyed the ruins, his horse stumbled on some red-hot coals and William was fatally injured in the fall. He died in Rouen on 9th September and was buried in St. Stephen's Church in Caen, which he himself had founded many years earlier. A plain slab still marks the place of his tomb, although his actual bones were scattered by the Huguenots in 1562.

William the Conqueror was not only a great general but also a man of iron will and great patience. Although he was a greedy man, and callus about human suffering, it appears that he did not take delight in extortion or cruelty for its own sake. The various ferocious acts with which he is credited, and the merciless punishments which he meted out, were all undertaken in cold blood as part of his general policy. But he was not by nature disposed towards unnecessary bloodshed.

His policy towards the Church seems to have been praise-worthy; and in an age when purity was uncommon he was distinguished by his temperate habits, his sincere piety, and his blameless private life. He had four sons, including the future kings William ll and Henry 1, and five or six daughters.