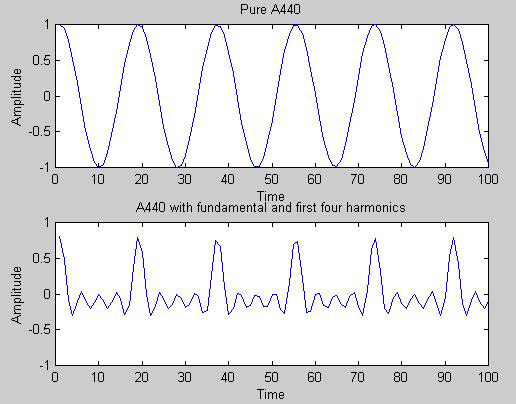 A440 is a standard method of tuning in which the note A above middle C (A4 in scientific pitch notation) has a frequency of 440 hertz (cycles per second). This is sometimes referred to as concert pitch.

In 1936, ANSI (the American National Standards Institute) adopted the standard establishing 440 Hz for the pitch of A above middle C. Prior to that, a variety of tuning methods were in existence, with A having frequencies from 373 Hz to 457 Hz. ISO (the International Organization for Standardization) adopted this standard in 1955.

A440 is widely used as concert pitch in the United Kingdom and the United States. In continental Europe the frequency of the A is commonly 442 Hz or 443 Hz. In the period instrument movement, a consensus has arisen around a modern baroque pitch of 415 Hz (currently, A flat), baroque for some special church music (Chorton pitch) at 466 Hz (A sharp), and classical pitch at 432 Hz.

The A above middle C is sometimes referred to as Concert A. (The C above Concert A is called Concert C.)

There are many instances of musicians recording songs that are under or over A440, especially before the days of digital recording and digital tuners. In some cases, this was done intentionally. For example, all of the early songs by The Beatles, such as "Please Please Me" were recorded at A435 rather than A440; it was only when they started playing with orchestral instruments that they needed to tune up to the conventional A440. The solo piano part on The Beatles' "In My Life," played my George Martin, was intentionally recorded at much slower speed and then sped up so that Martin could avoid making mistakes at full tempo. In other cases, musicians in a band would tune relative to each other and not to A440. Some of the songs on The Rolling Stones' Exile on Mainstreet, for instance, are not at A440 because the band tuned to the piano in the studio which was slightly off concert pitch.