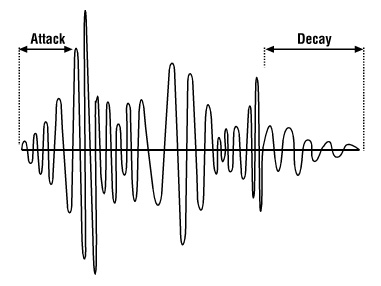 Figure 2. Attack of a piano note.

Attack is the initial period of a typical envelope during which a sound's attribute (such as volume) increases from 0 (silence) to its maximum amount. The length of the attack determines how soft or harsh a sound is. For example, most drum or percussion sounds have a short amplitude attack time and thus have a sudden "harsh" start. A string sound usually has a long amplitude attack and thus has a "soft" start and eases in. See also decay; ADSR.

Attack time may refer to: