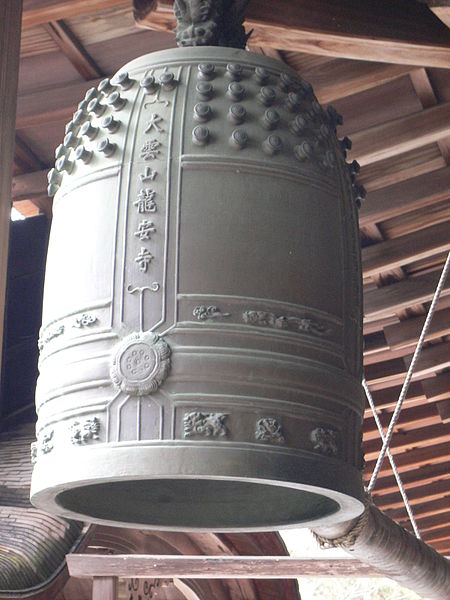 Bells are a feature of ceremony and ritual. They are used for meditation and prayer, and to mark significant life events such as funerals and weddings. Bells are used to mark out the timetable of our daily lives – appearing as alarm bells, warning signals and in mechanized chimes in clocks. They vary in weight from over 100 tons to a fraction of an ounce.

In Japan, bonsho temple bells are rung 108 times at the end of the old year to banish worldly cares and sin. Public buildings also are decorated with hanging bells like the 13,760-kilogram (13.5-ton) hour bell known as 'Big Ben' in the tower that forms part of the Houses of Parliament in London.

Bells can be made from wood, stone, glass, or terracotta, although metal is the most common material. They are usually cast in a type of bronze known as bell metal which is an alloy of 13 parts copper to 4 parts tin. In shape they range from spherical or crotal bells, through shallow mushroom shapes, to the classic church bell with a flared lip.

The shape of the bell influences its timbre. Bells that are uniform in cross-section along their body, like Japanese and Chinese temple bells (bianzhong), have a slow attack but a long decay, which can make the sound travel a great distance. A cone-shaped bell with an exaggerated lip, like a western church bell, has a very strong attack and a brazen sound. True bells are tuned to a specific pitch.

Bells have been used in Southeast Asia since 2000 BC, and the Chinese are believed to have developed the technique of bell-casting. A metal bell cast in a mould formed from a cope (the outer skin of the bell) and a core (the inner skin). In pre-industrialized times, bells were made from a wax model, which was coated with layers of clay loam and baked in a bell pit, allowing the wax to melt and drain away, leaving a mould in baked clay into which the heated liquid-bell metal was cast. Once the metal has set cold, the bell is turned by rotating it on a turntable, mouth upwards, and shaving small amounts of metal off the inside walls of the bell. It is then cleaned and polished.

A bell has five principal elements to its sound. The 'hum note' is the lowest pitched overtone and lasts the longest when the bell is struck. An octave above the hum note is the prime note or strike note, the most prominent pitch heard when the bell is struck. Three further overtones – the tierce, quint, and nominal – sound a minor third, a perfect fifth and an octave respectively above the prime. Once tuned at the foundry, a bell needs no further tuning, and provided it is not damaged it will retain its tuning indefinitely.

Different musical cultures prefer bells tuned in different ways. Russian bells, for example, are cast to sound a particular pitch, but they do not have fine adjustments made to their tuning as is common with European bells. Ancient Chinese bells were constructed to play two pitches. Striking the bell at different points would either activate or suppress the hum note, making the bell sound lower or higher.

Bells may be struck by a clapper suspended inside the bell. Those suspended in a tower are either mounted on a wheel, turned by a rope – common in English and American churches – or the bell will remain stationary and be played by the clapper being pulled to one side by an extension cable – as in many Eastern European churches. Bells can also be hit mechanically or manually on the outside with a hammer or ramrod. Large Buddhist temple bells or bonsho are played this way.

A 'ring' of church bells may consist of any number from 5 to 12. With 5 bells 120 variations of order, or changes, are possible; with 12 bells they number almost 480 million. Change ringing involves changes with various traditional names, such as bob major, Oxford treble bob, and grandsire triples.

On continental Europe the carillon is an ancient institution, especially in Belgium and Holland. This consists of a series of anything up to 70 bells played by skilful artists from a manual and pedal console somewhat similar to that of an organ but more cumbersome. Tunes and simple harmonies can be performed.

Handbells are common throughout India, Japan and China, and appear in Indian records as far back as 3000 BC. They reached China in around 1600 BC, Japan from the sixth century AD and then appeared in Europe from the eighth century, probably via Christian missionaries returning from Asia.

Handbells tuned in sets and fitted with leather straps and spring-loaded clappers were introduced in the UK in the late-seventeenth century. Championship competitions in the nineteenth century developed the art further, and after some decline in the twentieth century, handbells now enjoy worldwide popularity. Within a handbell choir, each player will play four or five bells from a chromatic set of bells that could span up to three octaves.