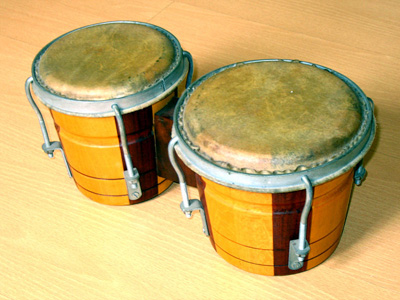 Bongos are a pair of small, single-headed Afro-Cuban drums, conical or cylindrical in shape, which are permanently attached to one another. One of the drums (8 inches / 20 centimeters diameter, 15 inches / 30 centimeters length) is larger than the other (6 inches / 15 centimeters diameter, 8 inches / 20 centimeters length) and tuned at a lower pitch than its partner. The larger drum is called the hembra (female) and the smaller the macho (male). Bongos are held between the knees and played by striking the head of the drums with the finger tips, flattened finger, butt of the hand, or palms.

Both congas and bongos are widely used in Cuban son, which originated in the late-19th century. This combined Spanish music with African drumming styles and is the ancestor of salsa. A typical son ensemble includes a vocalist, guitars and string bass; and bongos, maracas, guiro. and claves. Bongos are played also in salsa, rumba, mamba, and cha-cha music. Within an ensemble, the bongo player, or bongocero, leads the other percussion with improvised solos and decoration of the main rhythm. Throughout Latin-America, the term 'bongo' is also used for timbales, a pair of single-headed cylindrical drums invented in Cuba in the 1940s, and commonly used in many styles of Afro-Latin music.