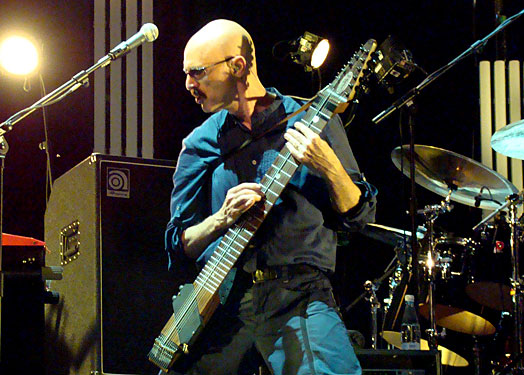 A Chapman Stick is a large instrument with a wide fretboard and eight, 10, or 12 strings. It is played by tapping (or 'hammering-on') a string at the desired fret with the finger and holding it down with the sustain of the note. Since only a single finger of one hand is needed to sound each note, the accomplished player can, using three or four fingers of both hands simultaneously, produce complex passages of music comprising bass, harmony, and lead lines all at once.

The Chapman Stick was the unique vision of guitarist Emmett Chapman. In 1969, his discovery of a novel two-handed tapping method on his guitar enabled him to play multiple, independent lines, each hand perpendicular to the fretboard and approaching the board from opposite sides. Chapman's search for an instrument that was large enough to accommodate this technique led him to design the Chapman Stick, first distributed in 1974.

There are currently six models of Chapman Stick available: