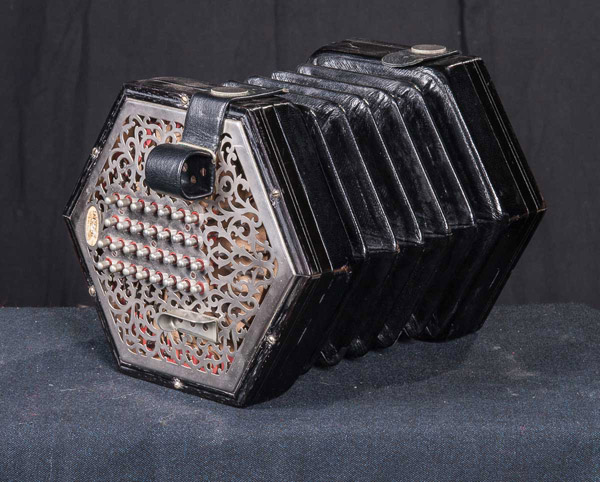 The concertina, or "squeeze box", is the smallest of all conventional keyboard instruments, and the lowliest cousin of the organ (except the shirt-pocket harmonica). Strictly speaking, however, it has neither keys nor a keyboard. Nor has it a uniform shape.

Whereas the standard English concertina is hexagonal, German and American models are square. The basic principle, though, is common to all: tuned metallic reeds are set in motion by currents of air generated by a hand-operated bellows. As the player's hands incline outwards, the bellows 'inhale'; as they contract, they 'exhale', Pitch and rhythm are controlled by studs or buttons at both ends. These are manipulated by the fingers, while the thumbs and/or the heels of the hand are anchored to the sound boxes by purpose-built straps.

As on "proper" keyboards, the left hand looks after the lower end of the pitch spectrum while the right hand attends to the upper. Considerable variety of both tone and volume can be achieved by contrasting alterations of the speed and force with which the hands control the instrument's 'breathing'. It comes in four different sizes – treble, tenor, bass, and double bass – covering between them a total range of just over six-and-a-half octaves.

One crucial difference separates the English concertina from its European cousins, namely that it sounds the same note on both extension and compression of the bellows, while the continental model sounds different degrees of the scale, each button thus producing different notes. Though widely associated with the so-called working classes, village dance halls, and shipboard distractions, the concertina, patented by its inventor Charles Wheatstone (1802–1875) in 1829, has stimulated a number of composers (albeit all of them minor) to write concertos and other concert hall works for it – among them an Adagio For Eight Concertinas in E and a Quintet in D for concertina, violin, viola, cello, and piano by the Dutch composer Edouard Silas (1827–1909).

This instrument has also been drafted into the symphony orchestra, most notably by Charles Ives (1874–1954) and Percy Grainger (1882–1961. Alternative forms of it include the aeola, using an octagonal shape, and the "Duet System" in which a full chromatic scale is provided on both keyboards. The best known variant, however, is the much larger bandoneon constructed by Heinrich Band (1821–1860) and strongly favored in South America, both in folk and popular music and in the works of Astor Piazzola (1921–1992), who put the bandoneon indelibly on the musical map of the world.