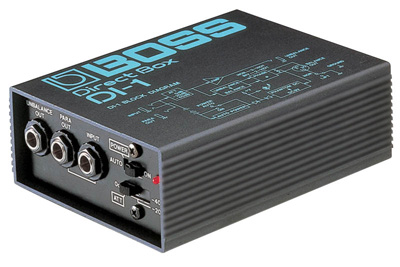 Direct injection (DI) is the technique of connecting the output from an instrument, such as a guitar's pick-up or keyboard, directly into an input channel of a mixing console. The output from some instruments can match the input on the console, but frequently a special DI box is needed. Guitars usually have a high impedance output and a DI box facilitates impedance matching with the console's input.

If a guitarist's on-stage amplification adds color or character to the sound, a "speaker simulator" is a much better alternative to direct injection. A speaker simulator is a sound processor which takes a signal from a guitar amplifier and processes it to simulate the sound of a speaker cabinet without spending time miking up the cabinet. The signal from the simulator is fed directly into the mixing console. Advantages include consistent sound quality both live and in the studio, not picking up unwanted noise or sound from other instruments and, because there is no microphone, there's no risk of unwanted feedback.