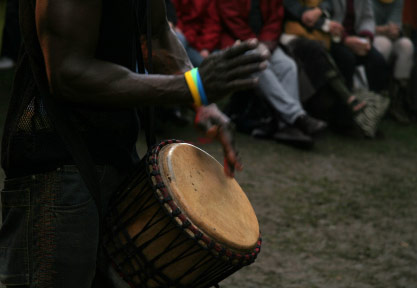 The djembe is perhaps the best-known of the goblet and hourglass type of drum commonly found in Africa, the Middle East, and the Far East. They are normally tuned to a specific pitch, although the heads may be tightened to create different sonorities.

Goblet drums are single-headed drums shaped like a wineglass, with a hollow bowl tapering to a long, thin body. Hourglass or waisted drums are double-headed drums with a body shaped like two goblet drums attached to each other. Hourglass drums often have floating heads, where the drumhead is stretched across a metal frame that is wider than the drum body. It rests on the drum body but is not attached to it. The heads stay in place by being laced to each other.

In both types of drum, the drum head may be tightened by using tuning pegs, as in the African kpanlogo and Middle Eastern dumbek, bracing sleeves, as in the Korean changgo, or by adjusting the lacing of the drumhead, as in the African sabar drums. Hourglass drums may be tuned so that one head is higher than the other.

The djembe, which is 32–40 centimeters (13–16 inches) in diameter and 60 centimeters (24 inches) in length, is played throughout West Africa. It first came to world attention in the 1950s through the European tours of Les Ballets Africains, Latterly, the increased popularity of world music has also helped disseminate its influence.

The djembe is normally played with the hands. Traditionally these drums are carved from a single log and have a solid body below the cup of the goblet. The interior of the drum has a series of teardrop-shaped divots that enhance the drum timbre. The head is made from goatskin or calfskin, and is laced to the drum body with cords running vertically down the drum. More cords are woven horizontally through the vertical cords to tighten the head.

Djembes made by western percussion companies may have fiberglass or metal bodies made from glued-together slats, skins or plastic heads, with a metal ring holding the drum head in place and metal tuning pegs like a western snare drum.

Djembe playing technique is similar to that of other goblet and conical drums in West Africa and the Middle East. As with many musical cultures, drum rhythms are vocalized. Playing the center of the head with the palm and letting it ring produces a bass note, called goun (right hand or dominant hand) or doun (left hand). An open note played at the rim with fingers only is called goh (right hand) or doh (left hand). A slap sound has a higher pitch and is played with the cupped hand at the rim. This is called pa (right hand) and ta (left hand).