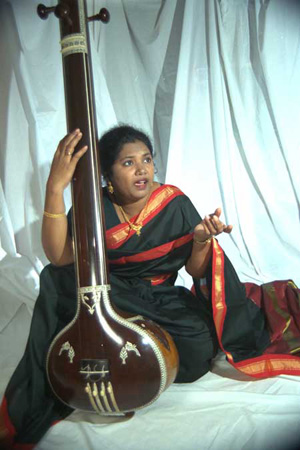 The tanpura: a sitar-like instrument used as a drone.

A drone is a sustained, monophonic musical sound, usually consisting of a bass note or notes, which plays continuously along with a melody. Also, an instrument or part of an instrument that produces such sounds may be called a drone, such as the drones of a bagpipe.

One of the simplest kinds of drone is a single-reed pipe joined to a melody pipe, as in the case of the arghul (the name and spelling varies) found widely in Arabic countries. The drone pipe maybe the same length as the melody pipe, or extended to give a lower note, but lacks the finger holes of the melody pipe.

Drones are found extensively in Indian music where they perform an essential function. Whereas Western music has very few modes, and it is generally easy even for the untrained ear (perhaps subconsciously) to locate the tonic or root, Indian music has a myriad of modes making this easy identification of the tonic almost impossible. The role of the drone is to supply a continuous harmonic basis and point of reference for a performance. The number and type of drone notes varies, as does the instrument on which these notes are played. One example of a drone instrument is the tanpura, or tambura, which closely resembles the sitar, but has much fewer strings and no frets.