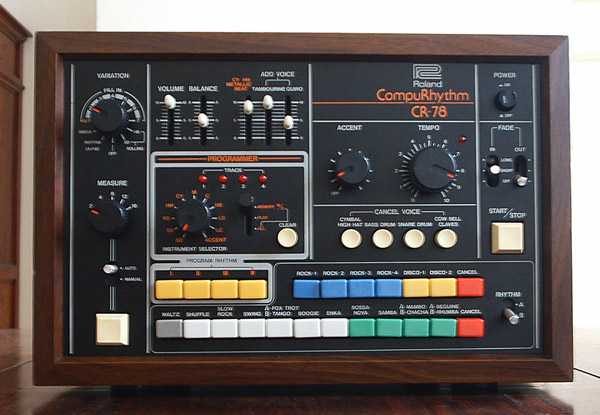 A drum machine, also called drum pads, is an electronic device that uses synthesized or sampled sound to emulate drums or other percussion. It is programmed to play rhythm patterns and aids musicians in time keeping and music production.

The history of the drum machine dates back as far as the 1930s, when Leon Theremin (1896–1993) was commissioned by composer Henry Cowell (1897-1965) to produce the hugely complicated Rhythmicon rhythm machine. The rhythm machines of the 1960s tended to be built into electronic organs to provide preset accompaniment patterns such as 'Tangs' or 'Bossa Nove'. The first true standalone drum machine, the Rhythm Ace, was produced in 1970 by the Ace Tone Company. Like its organ-based predecessors, the Rhythm Ace was not programmable and relied on preset patterns.

It was not until the Roland CR-78 on 1979 that musicians could programme in their own rhythmic patterns. Roland followed the success of the CR-78 with a range of drum machines over the following years, including the classic TR-808. This used analogue synthesis to produce its booming bass, cutting snare and piercing cowbell sounds. While no one could mistake it for the real thing, its distinctive tones ensured that it found favor among musicians.

The 808's competition came in the form of a drum machine designed by guitarist Roger Linn. The LM-1 and its successor the LinnDrum, offered the musician far greater realism in the form of sampled drum sounds. Its sounds can be heard on material throughout the 1980s – notably, the Human League's Dare album.

Roger Linn went on to lend his expertise to the design of Akai's MPC range of sampling drum machines – instruments that are still widely thought unsurpassed in terms of their ability to impart musical feel through the subtle manipulation of nuances in timing.