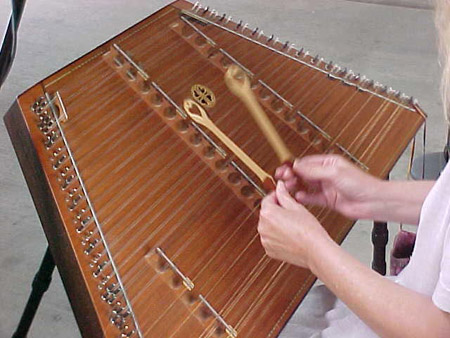 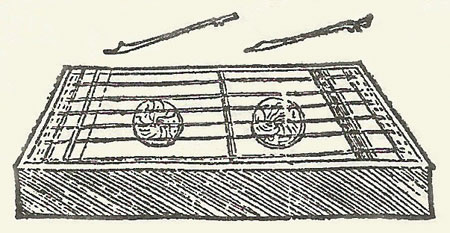 A dulcimer or 'hackbrett', from Virdung's Musica getutscht, Basle, 1511 – the earliest printed book on musical instruments.

A dulcimer is a musical instrument resembling a flat box, with sounding-board and bridges, across which are strung wires tuned by pegs at the sides, and played by striking the wires with a small piece of wood in each hand, or more usually with two cork-headed hammers. The dulcimer in its simplest shape (akin to the psaltery, which, instead of standing on a table or on legs of its own, was carried in the hand like a harp) is one of the most ancient of instruments, appearing in Assyrian scriptures. The dulcimer may be regarded as an ancestor of the piano. The czimbalon of Hungarian bands is essentially a dulcimer. There is another type of dulcimer, played by plucking, which is called the Appalachian dulcimer.