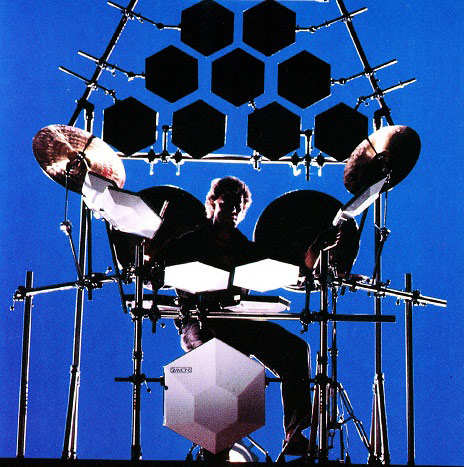 The drum is perhaps the oldest instrument known to man. Drummers have always sought increasingly sophisticated ways of refining their art and gaining access to as broad a palette of sounds as possible and, in many instances, have embraced the electronic revolution as enthusiastically as their keyboard-playing counterparts.

Early electronic drum systems included the Electro-Harmonix Space Drum and the Pearl Syncussion of 1979, a two-channel synthesizer that could be triggered from a pair of bongo-like drums fitted with electric transducers. This groundbreaking instrument suffered from a poor reputation due to the overuse of its synthetic, decaying-pitch tom-tom sounds in disco tracks of the era.

The first full, true electronic drum kit was the Simmons SDSV (SDS5), produced in 1982. The SDSV consisted of a sound module that employed analogue circuitry to synthesize the sound of kick, snare and tom-tom drums, triggered from distinctive, visually appealing hexagonal drum pads. The player had control over various aspects of the sound – such as noise level, tone level and decay. However, many players found the playing surface of the pads too firm in comparison to conventional drums and, despite the introduction of hi-hat and cymbal sounds, most players found these inadequate and retained acoustic cymbals. The sound of the Simmons kit is one of the defining sounds of 1980s pop music and can be heard in numerous pieces of music, such as Jan Hammer's 'Miami Vice'.

In recent times electronic kits such as the Clavia ddrum4 and the Roland V-Drum system have demonstrated a high degree of sophistication, playability and convincing emulations of real drum sounds. Percussionists who have exploited the potential of electronic kits include the ex-King Crimson drummer, Bill Bruford.