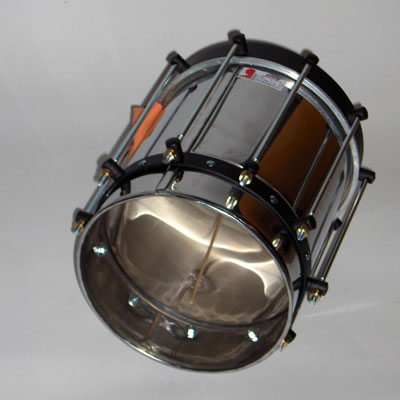 The cuica plays an important role in samba music.

Friction drums are folk instruments of pre-industrialized Central Europe, Africa, and Latin America. They are often associated with spiritual music because of their unusual sound.

A friction drum comprises a vessel covered in a membrane which is made to vibrate by means of a stick or string rubbed against or pushed through it. In the Brazilian cuica, the end of a stick is attached to the inside of the drum skin. The player rubs the stick with a damp cloth and presses the outer head with the fingers of the other hand to alter the pitch. The closer one presses to the center of the cuica, the higher the sound.

The drumhead may also be pierced by the stick and played by pushing it up and down, as in the Flemish rommelpot (rumblepot). In the Hungarian köcsögduda (jughorn) and African lion's roar, a cord is inserted in the drumhead, held taut, and rubbed by wet or rosined fingers. The lion's roar may be used as a lure in lion-hunting as it produces a sound similar to that of a female lion.

Although not percussion instruments, friction drums are similar to the bullroarers that originated in Australia. There are pieces of flat wood attached to a cord, which are whirled in the air. The sound is produced by the vibrations of the flat object as it rotates. Changes in the speed and angle to the ground will produce different sonorities.