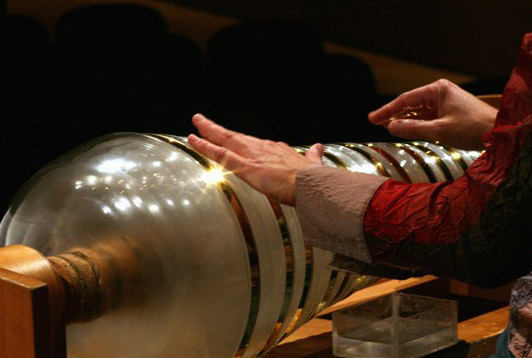 Understanding how to use friction to produce sounds in glass goes back to Galileo Galilei (1564–1642), who discussed the singing effect achieved by running a moistened finger around the rim of a glass.

In 1743, the Irish musician Richard Puckeridge created an angelic organ, or seraphim, from glasses rubbed with wet fingers. The glasses were filled with water to different levels to produce different pitches. The composer Gluck also played a similar instrument.

Benjamin Franklin (1706–90) adapted the idea and created an armonica – or glass armonica – in 1761, in which nested bowls of different diameters were mounted on a horizontal spindle turned by a foot-operated treadle. The sound was produced by rubbing the rims of the bowls with moistened fingers. On Franklin's glass armonica, the performer could play up to 10 notes at once, which greatly increased the range and scope of the original instrument, where playing more than two notes at once was almost impossible.

The glass armonica, or musical glasses, enjoyed a brief vogue in the eighteenth and nineteenth centuries. Gaëtano Donizetti (1797–1848) used it in the mad scene in Lucia di Lammermoor (1835) and Saint-Saëns used it to represent the underwater world in Carnival of the Animals (1886). It became a popular domestic instrument. However, rumors that playing the instrument could send performers and listeners insane – perhaps fueled by Viennese psychiatrist Franz Mesmer's (1734–181) use of the instrument in his demonstrations of mesmerism – caused the glass armonica to wane in popularity.