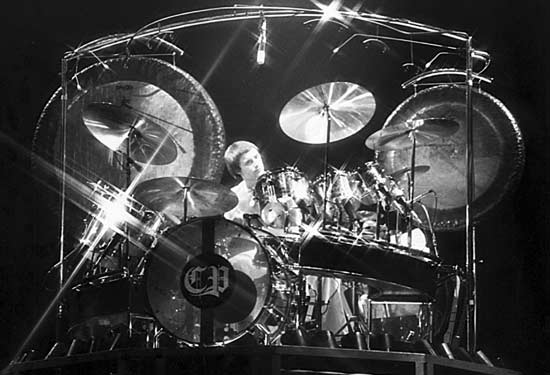 Two gongs hang behind the drum-set of Carl Palmer.

A gong is a percussion instrument consisting of a suspended, tuned bronze disk played with a beater. It should not be confused with the tam tam, which is untuned and has no central protrusion or boss. Gongs have a definite pitch and fundamental note with rich overtones.

The timbre of gong depends on the relative dimensions of the raised boss, the bow of the gong, and the rim, and the angle at which the lip is turned back. Chinese gongs are hammered into a flat sieve shape and do not always have a raised central boss. The Chinese traditional orchestra includes a set of 10 to 20 yunlo (cloud gongs) and the quing (tuned bronze bowls).

Javanese and Burmese gongs have a raised boss and are shaped like a curly bracket in cross-section. They also have a wide rim. They are struck with a wooden beater covered in leather or bound in cloth on the central boss, which is the main antinodal point. There are several examples of Southeast Asia gongs that have a rising tone once struck. These include the Chinese jingluo, which is used in Chinese opera, and the Korean ching.