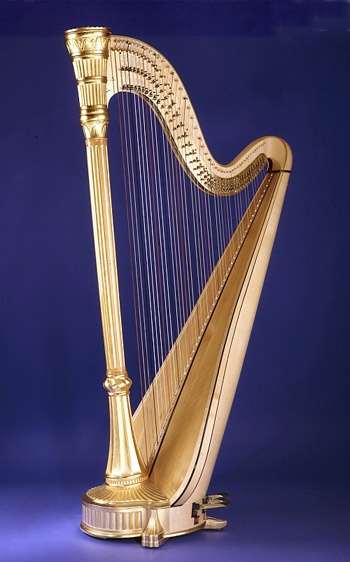 The pedal harp or concert harp. 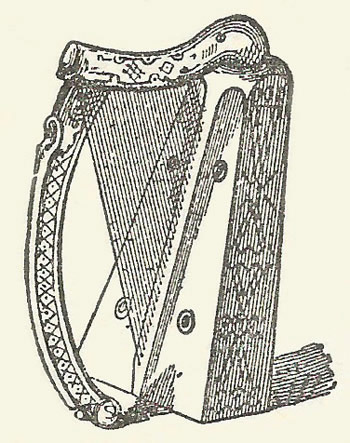 Irish clàrsach. Reputed to be that of King Brian Boru (926-1014) but probably of a somewhat later period. Now in the library at Trinity College, Dublin.

The harp is clearly recognizable from its triangular shape, consisting of the resonator and neck. The strings in all harps run perpendicular to the resonator. In many cases a supporting arm, known as a forepillar, runs from the end of the neck to the resonator to help sustain the strings' tension.

Although the earliest known use of the term 'harp' was in AD 600 by the Bishop of Poitiers, Venantius Fortunatus, pictorial examples of the design have been found as early as 3,000 BC in the Middle East and Egypt. Images of harp-like instruments have even been found in rock paintings in France dating from 15,000 BC. It is often suggested that the harp's origins lie in the plucking of a hunter's bowstring, although there is no evidence to give credence to this.

The oldest examples of European harps date from the fourteenth century, but the distinctive medieval design, in which the resonator is carved out of a single piece of wood, is thought to date as far back as the eighth century. These harps could have been strung with a variety of materials, often what was most readily available, including gut, horsehair, brass, or bronze, and even silk. The ancient small Celtic harp known as the clàrsach was revived in Scotland in the twentieth century.

Medieval harps were small, with a range around that of the human voice, and were limited to playing one diatonic scale. By the early 1500s, the harp's compass had been extended to over three octaves. Techniques of stopping the strings to obtain chromatic notes were developed in Spain during the sixteenth century as well as experiments with harps using more than one rank of strings.

Harps with multiple ranks were cumbersome to play, however, and in the seventeenth century, a technique was developed of stopping the string by turning a small metal hook next to the string on the fingerboard to increase its tension. Such a system was too slow to be of any value but it led to the creation of the pedal harp, in which every note in all octaves (for instance, all the Cs) could be sharpened by using a pedal.

By using seven pedals, one for each note of the scale, the entire chromatic compass became available. This system, known as the single action pedal harp, is generally credited to Jakob Hockbrucker, though other makes have also been closely linked to its invention.

Despite modifications, the sing;le-action pedal harp was limited since it could in eight major and five minor scales. The chromatic style of music popular by the nineteenth century mean that the harp was too inflexible to play a major role.

A solution was found by a man named Erard, who designed a system that increased the tension at both ends of the string allowing not one but two changes to be made to each string. The harp has 14 pedals each of which has two positions. Depressed once, the strings are raised by a half step; depressed again they are raised by a further half step, giving a tone altogether. This double-action system, patented in 1810, gave access to the complete chromatic range from E' to e"" and remained in use almost unchanged until 1996 when the French firm Camac Production made a number of improvements.

The only other harp design of significance was by Gustave Lyon, of the French form Pleyel, Wolff et Cie who, in the late nineteenth century came up with an ingenious design using two interlocking ranks of strings, offering the full chromatic range with no pedals. This proved immensely popular with nearly 1,000 instruments being made over 30 years. By the middle of the twentieth century, however, it had fallen out of favor in spite of its capacity to play not only harp but also piano repertoire.