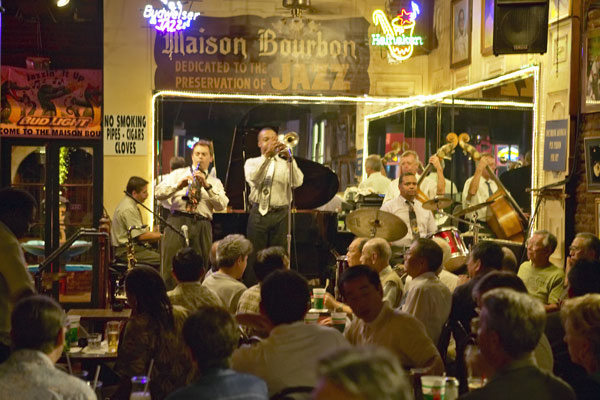 Jazz is a style of music of Afro-American roots characterized by a strong rhythmic understructure, blue notes, and improvisation on melody and chord structure. Jazz developed from early ensemble improvisation to big band swing to the soloing brilliance of bop to thorny atonality and back to the current rearticulation of melody and harmony.

Jazz groups have a flexible approach to instrumentation, although certain instruments are favored for different jazz styles. Like rock music, instruments tend to be chosen to fulfil certain roles, a bass rhythm section providing a beat, a bass line and harmonic filling material, and the frontline instruments playing the tunes.

The earliest forms of jazz – New Orleans and Dixieland– have a core grouping of trumpet, clarinet and trombone supplying the tune and piano and drums forming the rhythm section. Sometimes violins or banjos would be found and a double bass soon became standard. As an antidote to the larger bands and swing bands that took over in the 1920s and 1930s, smaller breakaway groups performed occasionally, including Benny Goodman's trio of clarinet, piano and drums, to which a vibraphone was later added. From groups like this, the bop style of the 1940s and 1950s arose, which was improvised to a large extent and demanded great agility. A typical bop group might consist of a front line of between one and four players, often including a trumpet and saxophone, and a rhythm section of piano, double bass and drums. Cool jazz, which was precomposed and more restrained, tended to feature more varied combinations of instruments as tone-color became more important. Miles Davis, the dominant figure of cool jazz, had at various times a nonet, a quintet and a sextet.

Free jazz, a highly experimental type of jazz pioneered in the 1960s often included unusual or bizarre instruments, such as the pocket-sized plastic trumpet of Don Cherry and the sirens, rattles, and modified saxophones (called the stritch and the manzello) of the saxophonist Roland Kirk. Bossa nova integrated Brazilian percussion instruments such as the congas and claves, while jazz-rock fusion, which sprung up in the 1970s, combined traditional jazz instruments such as the saxophone and trumpet with electronic instruments. Here, the electric bass guitar and synthesizer tended to replace the double bass and piano in the rhythm section.