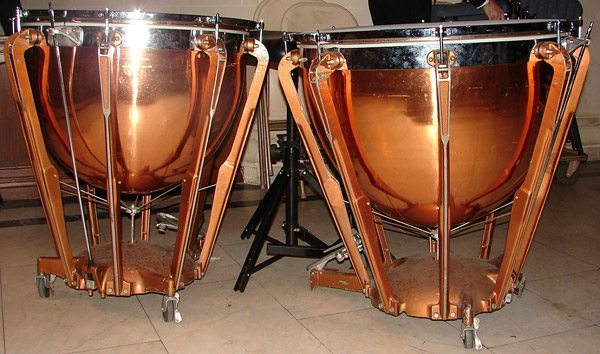 A pair of kettledrums or timpani. 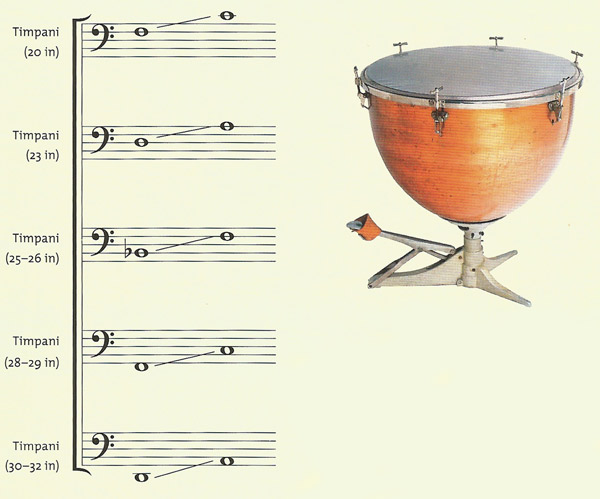 The ranges of kettledrums of different sizes.

A kettledrum, also called a timpani (strictly speaking, the singular of timpani is timpano), is a very large drum made of copper or brass which has a foot pedal that is attached to the head mechanism. When the foot pedal is depressed, the kettle drum makes a unique, "boing" type of sound. Kettledrums are most often used in orchestras and symphonies.

Kettledrums originated in Islamic countries in Africa and the Middle East, where they were used to accompany hunting and for ceremonial and military music.

Tuning a large kettledrum to produce a pitch accurately is an engineering challenge. The drum needs a mechanism to stretch a skin of consistent thickness over a perfect circle and hold it at the appropriate tension. The mechanism also needs to be able to cope with altering the tension of the head if the drum is to be retuned to another note.

The invention of the screw-tensioning tuning mechanism in Germany in the sixteenth century was the first step toward this goal. Instead of lacing the skin to the drum, as in the medieval drum, it was stretched over a metal ring, held in place by metal brackets incorporating tuning screws clamped to the side of the bowl. The tuning screws were adjusted by means of a removable key. This was later replaced by T-shaped taps set around the rim of the drum, which were easier and quieter to use.


Development of the kettledrum

Early orchestral kettledrums couldn't be retuned during a performance and, as a result, only played in the tonic key. They almost invariably played the tonic (I) and dominant (V) notes.

In the nineteenth century, instrument makes began to produce machine kettledrums that could retune more easily, enabling players to play more chromatic parts. A master screw that altered the pitch of all the tuning screws at once was introduced in 1812. However, this model placed much of the tuning mechanism inside the bowl of the drum and impaired the purity of the tone.

A German system invented around 1850 altered the tension of the head by rotating the whole drum. Pedal-tuned drums appeared around 1880 and became the norm in orchestras from the early-twentieth century. Plastic kettledrum heads were introduced around 1960, providing a durable skin far less affected by atmospheric conditions than vellum, which sagged and went flat when the air was humid, and tightened and went sharp when the air was dry – thus altering the pitch of the drum after it had been tuned.

Typically, a modern symphony will have five kettledrums, covering a range of D to b. The drummer uses a range of different sticks of varying thicknesses, covered in felt, wood, cork, rubber, and plastic, to achieve different timbres. Rolls are played as single-stroke rolls. Each drum has a reliable range of a fifth, as tuning becomes inconsistent at the extreme ends of a drum's range.

Although there are differences between manufacturers, generally the modern kettledrum has a hemispherical or parabolic bowl with a lip turned over and inward. A strengthening collar is placed inside the lip of the bowl. The drumhead is mounted in a hoop, which is laid over the open bowl and a counterhoop is laid over the top. The counterhoop is attached to six eight tension screws, which clamp to the bowl of the drum. Each tension screw is also attached to a rod, which travels vertically down the outside of the drum and is attached to the pedal mechanism. Moving the pedal moves all the rods and tension screws together, which in turn alters the tension of the drumhead. The pedal is also attached to a tuning gauge, which enables the drummer to tune the drum before a performance.

The drums must be damped during rests to keep clarity of tone, especially when playing those tuned in a perfect fourth or fifth apart, as is very common in orchestral music. The main note heard when the kettledrum is struck is the nominal first overtone. The second overtone sounds a perfect fifth above the first and will also resonate when another drum plays that note. So playing a drum tuned to a C will make a drum tuned to a G resonate. However, timpanists use this feature as an aid to silent tuning, which can be useful in the middle of an orchestral piece.