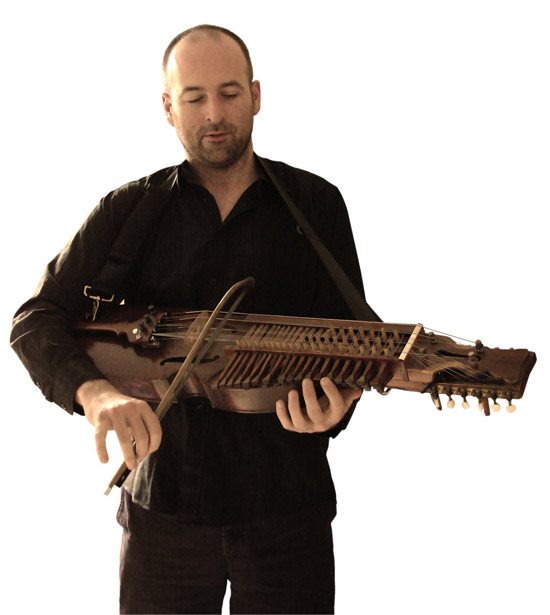 Sweden's nyckelharpa, now experiencing a boom in skilled players and makers, is known to have existed in the fourteenth century.

Its soundbox is a slightly waisted boat-shape, the prow extending to a short, thick neck, covered by a mechanism containing one or more rows of gravity-returned sliding wooden bars, pressed with the fingers of the left hand while the right hand wields a short bow. Each bar bears one or more wooden pegs that can be pressed against the melody strings to shorten their sounding length. Thin sympathetic strings, running in groups beside the bowed strings, add a silvery sustain to the sound.

The chromatic nyckelharpa, created early in the twentieth century, has three melody strings, one drone, and 12 sympathetic strings. Some of today's players are developing new forms and exploring the possibilities of older, slightly simpler forms such as the silverbasharpa.

The hurdy-gurdy, or vielle a roue, reached its most highly developed form (until today) in seventeenth- and eighteenth-century France, and it is France – and to some extent Hungary – that has been the epicenter of its current renaissance. Its key mechanism is broadly similar to that of a nyckelharpa, but it is bowed by a rosined wheel, rotating within the lute or guitar-shaped soundbox, driven by a handle inserted where a guitar's endpin would be. Designs vary widely, but all have melody and drone strings, and sometimes sympathetic strings. Many have a trompette – an extra drone running over a loose bridge that buzzes on the soundboard to provide a rhythmic pulse when the handle is jerked.