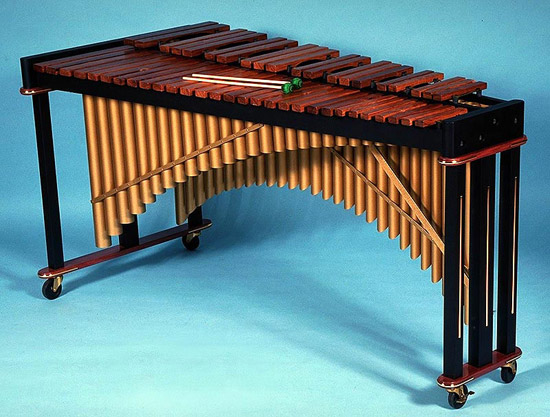 The marimba is a type of keyboard percussion instrument of African and Latin American origin. It consists of strips of wood of different length with tuned resonators underneath, the whole fixed in a frame and struck with mallets.

The modern, orchestral marimba began to be produced in about 1910 and has become increasingly popular with composers since the Second World War. It has a warm and resonant sound – mellower than that of the xylophone.

The modern marimba is generally played with four mallets, although it can be played with two, just like a xylophone. The mallets are usually yarn-covered, but uncovered rubber is sometimes used for effect. Mallets that are too hard can crack the bars of a marimba very easily. The bars are generally made from Honduras rosewood, but can be made from several other types of wood, all of which are rare and expensive.

The range of the marimba typically varies from four to five octaves. The top note is almost always three octaves above middle C, and the bottom note varies depending on how large the instrument is. (Large instruments can have a range of up to seven octaves.) Notes played on the marimba sound in the same octave as the written notation.