music of the spheres 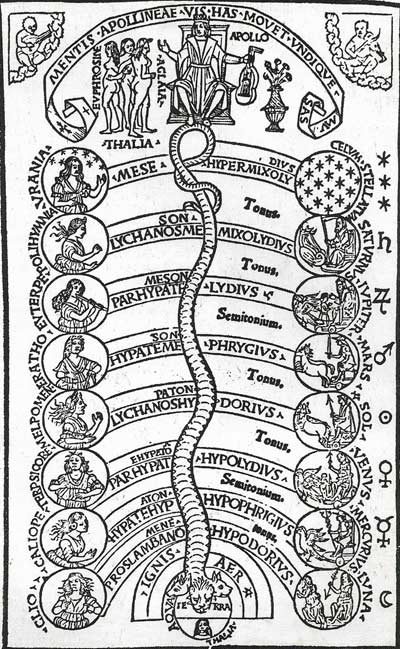 An engraving of Apollo presiding over the Music of the Spheres (1496) by Franchino Gaffurio..

Attributed to Pythagoras (c. 570–c. 495 BCE), "music of the spheres" is the idea that acoustical relationships between the planets are governed by their distance from Earth and their rotational speed, just as arithmetic divisions of a string generate different musical intervals. Plato (c. 424–c. 348 BCE) described it as eight Sirens (one for each body of the Solar System) orbiting around a turning spindle, each "hymning" different tones that together form one harmony. Around 900 years later, the philosopher Boethius (c. 480–c. 524) brought back these ideas with his notion of Musica mundana (the music of the world), to which he added Musica humana (the harmony of the human body).

This connection between music, mathematics, and astronomy had a profound impact on history. It resulted in music's inclusion in the Quadrivium, the medieval curriculum that included arithmetic, geometry, music, and astronomy, and along with the Trivium (grammar, logic, and rhetoric) made up the seven free arts, which are still the basis for higher education today. The term "music of the spheres" also appeared during the 18th century in connection with psychoanalysis, in which it was used as a metaphor to explain the relationship between self and the world.

Modern physics has renewed interest in the concept. Using music as a metaphor for string theory, physicist Brian Greene compared resonating particles to the different tones generated by a violin string. Most recently, NASA's Chandra X-ray Observatory detected sound waves from a black hole with a frequency of 57 octaves below middle C.