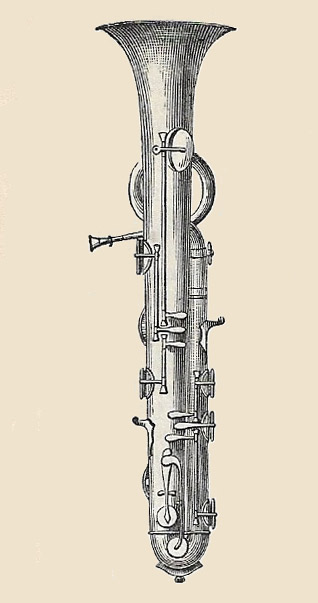 The ophicleide (from the Greek, ophic, "serpent", and kleis, "key") is brass bass wind instrument developed from improvements on the serpent about the beginning of the 19th century. It consists of a conical tube having a bell like that of the horn, a cup mouthpiece, and usually 11 holes stopped by keys like the old Kent bugle. It has the usual harmonic open notes of all brass instruments, its fundamental, never used, being an octave lower. By means of its keys it has a range, including all the semitones, of a little over three octaves.

Alto and double-bass ophicleides have also been made, but not much used. Unfortunately, for an instrument of such a characteristically rich tone, and capable of intonation so accurate as the ophicleide, that it fell out of use, being superceded by the simple three-valved instruments of the saxhorn type.