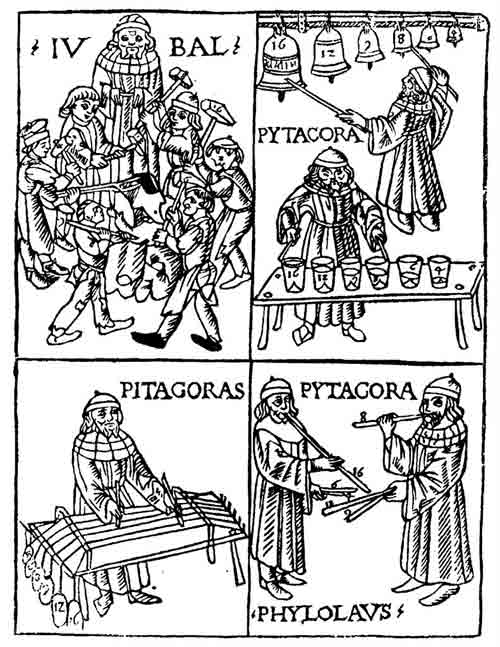 A woodcut from 1492 showing the Biblical figure Jubal as the discoverer of music (top left) and Pythagoras studying the relationships between intervals in differentinstruments.

Pythagorean tuning was the brainchild of Greek philosopher Pythagoras of Samos (c. 570– c. 495 BCE), who formalized a theory in which musical intervals could be derived from the simple ratios of string lengths. The tuning system utilizes the intervals of fourth (4:3) and fifth (3:2) to generate the scale. The difference between the two (9;8) makes up the whole tone, and a minor second is the remainder of a fourth minus two whole tones, the Limma 256:243. As a consequence, six Pythagorean whole tones , which would logically make up an octave (2:1), are larger by an interval called the Pythagorean comma (531,441:524,288), a small interval but noticeable to the human ear.

Despite its purely theoretical origin and practical problems – chords, including thirds sound out of tune, for example – Pythagorean tuning was favored throughout the medieval period and is still used today in shaping melodies on non-keyboard instruments, such as the violin. To many musicians, the larger Pythagorean whole tone sound better than ones of equal temperament (the scale used at keyboards today, in which the octave has been divided into 12 equal parts and which makes it possible to play harmonies in all keys).

The obsession of early music theorists with the size of scale steps has had a key influence on music, inspiring numerous attempts throughout history to create the perfect intonation system from compromises to create perfect harmonies in a limited number of keys, to contemporary systems utilizing tensions and dissonances for expressive effects, such as the use of the syntonic comma – the difference between a just intonated major third and the Pythagorean third – in the music of American composer Ben Johnston. Other attempts include keyboards with more than one key for certain pitches, to enable the tuning to be adjusted to different harmonies.

My videos on Pythagorean tuning