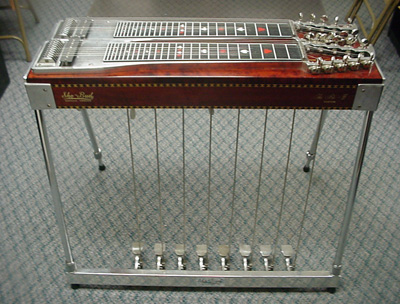 A pedal steel guitar is an electric version of the Hawaiian steel guitar that has a number of pedals that alter the pitches of the individual strings, is mounted an legs, and is played with a bar that slides along the strings. It is especially popular in country music.

In one form, the pedal steel guitar has two necks with eight sets of pedals and 10 strings on each neck, though as many as 12 or 14 is not uncommon. One neck is normally tuned to a chord of E9 (a combination of the notes E-G♯-B-D-F♯) and the other to a chord of C6 (a combination of C-E-G-A). The pedal steel guitar is a fretless instrument, the strings being stopped with a metal bar called a 'steel" which is used to slide up and down, creating glissandi. In another version, the instrument has only a single neck and three foot pedals.

Four legs normally support the guitar with the performer sitting on a stool. The right foot is used to control the volume while the left leg controls the pedals using both the foot and the knee to move the pedals. The strings are plucked using finger and thumb picks – metal picks that are worn like thimbles.