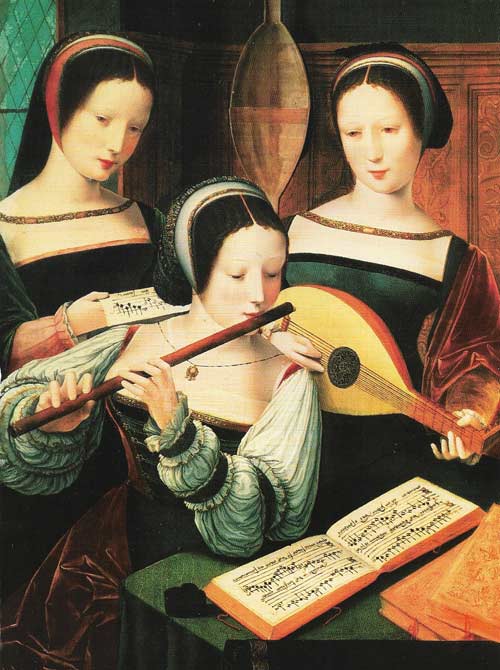 A Concert of Thee Female Figures (c. 1520), by the artist known as Master of the Female Half-Lengths.

Renaissance ('Rebirth') was an era in art and intellectual history that spans from the mid-15th century to the end of the 16th century. Traditional accounts of the period emphasize the "discovery of man", a renewed interest in antiquity and science, and a reaction to the perceived notion of the "barbaric" medieval culture.

In contrast to practitioners of the visual arts and architecture, it was not possible for musician of the period to be inspired by actual music from antiquity. Instead, antiquity's influence came through theoretical writings by Plato and others on the relationship between music and text: music's role was to emphasize the meaning of the text, making a direct impact on the soul. Thus, vocal music was privileged over instrumental during the period. A stylistic consequence was that word-painting – letting the melodic patterns directly illustrate the emotion or imitate the action of a text – became a prevalent stylistic device both in secular and sacred music.

Thanks to the development of music printing during the 16th century, music could be more widely distributed. Instrumental music developed in a specialized fashion, both with performers devoting their time to one instrument and with instrumental ensembles consisting of similar instruments of different sizes. This practice carries on today in highly specialized orchestras that include homogenous instrument sections. The polyphonic compositional practices of composers in Italy and Northern Europe that shaped the Renaissance's highly complex vocal works, such as those of Luigi da Palestrina and Josquin des Prez, are still taught to music students at universities. Renaissance music is characterized by freer forms, and a progression from modes toward major and minor scales and harmony.