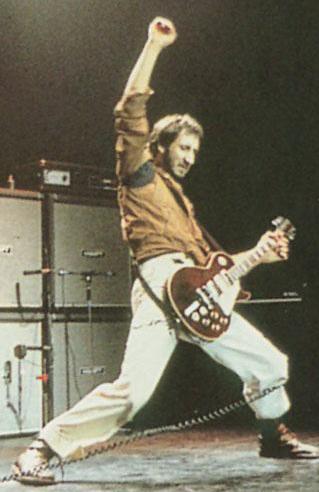 Pete Townshend of The Who.

The rhythm guitar player typically provides both rhythmic and harmonic backdrop for the single note voices and instruments in a band (vocals, lead guitar, bass, etc.). Rhythm guitar can be as straightforward as strumming some acoustic chords or something much more structured and funky.

In the context of most modern music, the drummer and bassist are considered to be the rhythm section. Both the guitarist and the keyboard players are therefore free to choose between playing with the rhythm section or playing on top of it.

This attitude has its roots in the days of big bands, when the guitarist and pianist were thought of as part of the rhythm section. It was the brass and woodwinds that played the melodies and harmonies, while the rhythm section concentrated on providing the pulse for the rest of the band.

Most modern music still depends heavily on a rhythm guitarist who understands the traditional responsibility of the instrument.

Most guitarists play by ear, relying more on their sense of rhythm than their knowledge of scale and chord theory. This means that when they play they concentrate primarily on their left hand – switching their right hand on to "auto pilot" and strumming instinctively.

It is the left hand that chooses the notes and chords, and therefore dictates the general direction of the right hand. When playing rhythm, another important contribution is damping. By holding down or releasing fretted notes, the left hand acts as the sustain control, and may also allow certain notes to ring while damping others.

Its two functions of selecting the notes and controlling their sustain make the left hand comparable to a piano. If this is the case, then the right hand is like the drummer. Playing fingerstyle or with a plectrum, the four right-hand techniques – downstrokes, upstrokes, alternate strokes, and right-hand damping – give the guitarist control over timing, volume, and dynamics. Combining the effects possible with both hands produces the wide variety of rhythm styles for which the guitar is well known.

The musical identity of each rhythm style results from a combination of six basic factors: the choice of plectrum or fingerstyle; the choice of chords – their complexity and application; the degree of sustain or damping; the subdivision of the bar into a rhythmic pattern; the beats that are accented or emphasized; and the tone of the guitar.