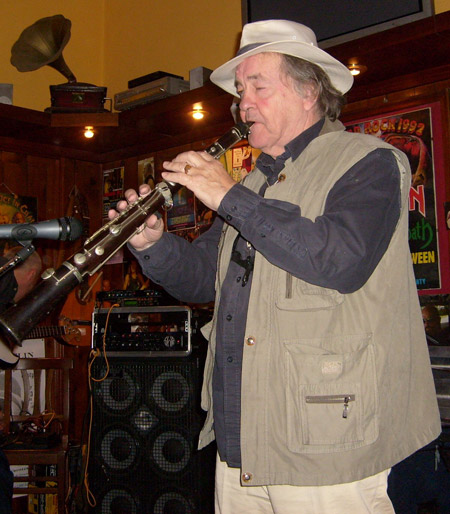 The tarogot is a wider-bored form of clarinet, with a fat tone.

At its simplest, a reed-pipe is made by slicing a flap out of a length of hollow reed or cane near the closed end, so that the cut piece springs slightly outwards, still joined to the rest of the reed at one end. Single-reed instruments were slow o enter the orchestra because traditionally they were regarded as folk instruments, suitable for dancing to but out of place in art music.

The top end of the pipe, containing the reed, including the blocked end and section with the flap, is placed in the mouth and blown. This breath pressure causes the flap first to bend inward towards the aperture left by its cutting, and then spring back. It does this repeatedly, hundreds of times per second. The regular pressure fluctuations caused by this reed vibration cause the air in the tube to vibrate, and a note is produced whose pitch is determined by the length of the tube; the presence of the air column forces the reed-flap to vibrate at the resonant frequencies of the column, not the flap's natural pitch. The effective tube length can be varied, usually by making four finger holes.

Though it is possible to make the whole instrument out of one reed or similar material, usually the vibrating section – known as the reed – and the tube are made of different materials and fitted together. The reed can thus be replaced when it wears out or breaks without disposing of the whole instrument.

An example of a simple two-part reed pipe is the instrument known in Croatia as a diplica. It is made from two pieces of reed: a section of reed tube with vibrating cut flap fits inside a section with five finger holes, and can be slid in or out for tuning. This is a delicate instrument, of limited life, but the sound is similar to that of a single-reed bagpipe chanter.

In most reed-pipes, the fingered tube is made of a more robust material – be it an existing tube such as bamboo or other cane, or wood, which requires some tool to make it hollow, or modern commercial tubing. Such are the Turkish sipsi and Serbian klanet.

Often a feature known in English as a bell is added to the bottom end of the pipe, intended to project or direct the sound, which on reed instruments emerges from the end and from the finger holes. This can be a cone made from the apex of a cow or other animal horn; such a horn-equipped reed-pipe is sometimes known as a horn pipe. Examples with wooden tube include the Armenian pku and Russian zhaleika.

Sometimes the blowing end has a cow-horn cone surrounding the reed; the player presses the wide end against his mouth, thus avoiding the need to get the reed wet by putting it in his mouth. An example is the Welsh pibgorn - an instrument that virtually disappeared but is now undergoing a slight revival.

The miswij (common in Egypt and nearby countries), both cane tubes have finger holes. Even more commonly, one tube has finger holes for the melody, while the other has none, or very few, and acts as a drone. An instrument of this type widely played in Arabic countries is the arghul (the name and spelling varies), in which the drone tube can be the same length as the melody pipe or extended for a lower drone.

Double horn pipes are also common, either with one horn bell for each tube or a common one for both. A further occasional addition, as with the single horn pipe in the case of the Welsh pibgorn, is a horn reed chamber. One example is the alboka, played in the Basque country, in which two short cane reed-pipes - one with five holes and the other with three - are supported on a wooden 'D'-shaped frame, with a small cow-horn reed chamber to blow into and a larger one forming the bell.

Some double-reed pipes, such as the Indian murali, murli or pungi – the latter the instrument used by snake-charmers - have a reed chamber made out of a spherical or pear-shaped gourd.

The launéddas has been played on the island of Sardinia for around 2,000 years. It consists of two cane reed pipes, a short melody pipe and a longer drone, tied together, plus a second separate melody pipe. As in some other reed-pipes, the attached end of the reed, rather than the vibrating end, is at the top. The player inserts the reed ends of all of them into his mouth to make a fat, polyphonic sound.

As with the majority of double-reed pipes, the launéddas player uses circular breathing – the skill of taking in air through the nose while keeping a continuous sound going on the pipes. This involves expansion and contraction of the players cheeks to provide a steady airflow. It is then only a short design step to provide reed-pipes with a built-in variable air reservoir.

Some reed-pipes are made not with what is termed an 'idioglot reed' – one sliced from the reed or cane material of the tube itself – but from a 'heterglot reed', in which the vibrating reed is a separate sliver of reed or other suitable material, these days including plastic, tied over an aperture in a reed-bearing mouthpiece.

The most widespread of this type of single-reed instrument are the familiar clarinet and saxophone families, which were developed in Western European classical music, but have their origins in less-engineered instruments. Simple, unkeyed clarinets include the rough-hewn Finnish mänkeri. Made of wood, often with a birch-bark bell, this has a cylindrical bore like an idioglot reed-pipe, but its close relative the Finnish liru had a conical bore, a frequent feature among heteroglot clarinets. Norway's tungehorn has a conical bore, since its juniper reed is tied to a goat or cow horn.

The Lithuanian birbyne is basically a horn pipe, and still exists in that form, but it has also been developed for ensemble playing into a larger, fatter wooden tube with relatively small finger holes, a cow-horn bell and a heteroglot reed assembly similar to that of an orchestral clarinet. Like many of the clarinet-type instruments, it has a much softer, more controllable tone than reed pipes – largely because the player can control the vibration of the reed with the lips and tongue.

Even closer to the orchestral clarinet, but with a wider conical bore and consequent honkier tone, is the taragot, invented in the mid-19th century by instrument maker J. Schunda in Budapest and nowadays played by traditional musicians in Romania.