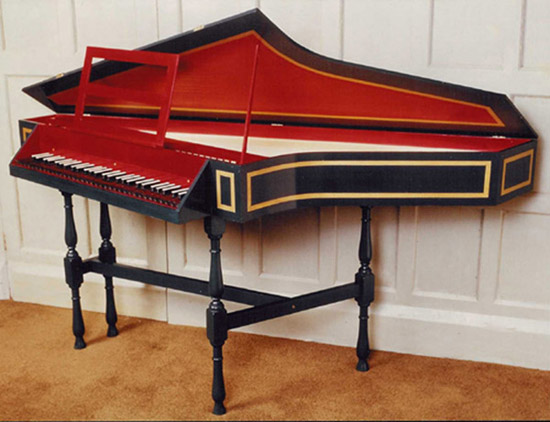 The spinet is known by many names and has several definitions. Perhaps the most misleading is the American usage of the term to denote a small upright piano. The most confusing is the used of the word to describe a square piano, and a more ancient confusion arising from its use as a synonym for the virginals or, indeed, any small harpsichord.

The word itself derives from the Latin spina ('"horn"), which refers specifically to the use of quills to activate the strings. In eighteenth-century France, the word 'spinet' was applied to any quilled instrument, regardless of size or design. The true spinet is a wing-shaped instrument, with a compass ranging from four to five octaves. It has a single set of jacks, and the strings are arranged diagonally from the keyboard, as opposed to the harpsichord and the piano, where they are at right angles, or the virginals, where they lie horizontally.


Popularity of the spinet

Early spinets are generally small and sometimes have the decorative rose in the soundboard – which was standard issue with the older virginals. It enjoyed its greatest popularity from the mid-seventeenth century to the late eighteenth-century, when its decorative appearance made it a much-prized piece of furniture (often independently of its musical function).

Though apparently invented in Italy in the late-seventeenth century by Girolama Zenti, the spinet enjoyed its greatest popularity in England, where its style and shape came characteristically to be known as "bentside" or "leg-of-mutton". Its foremost makes in the seventeenth century included Keene, Player, Haward, and the family form of Hitchcocks, and in the eighteenth, Messrs Slade, Mahoon, and Baker.