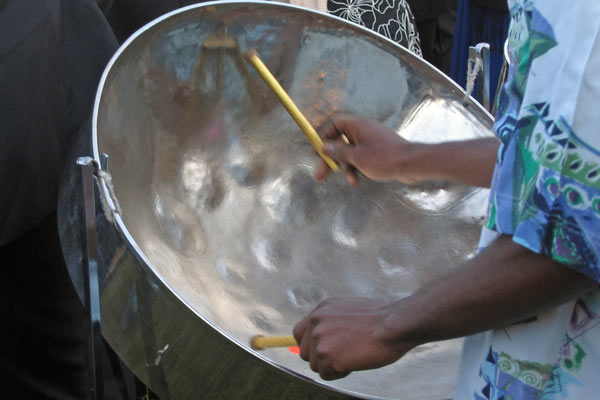 Steel pans and steel drums are a Caribbean instrument, originally made from oil drums beaten into shape and tuned. They originate from Port of Spain, Trinidad.


The origins of steel pans

In the late 1930s, local people took to playing discarded metal objects like food tins and engine parts at carnivals and other celebrations, after the British authorities banned the playing of skin drums and other percussion because they had been used by street gangs to incite violence.

Pan folklore states that it was Winston 'Spree' Simon (1930–1976) who, in 1942, discovered that dents in the top of the oil drums produced pitches. He created a 14-note ping-pong or melody pan by hammering out the top of an oil drum to produce a diatonic scale, and played this new instrument at the first post-war carnival held in Trinidad in 1946. Other musicians copied his innovation, creating drums of different tessitura and bands of tuned steel drums because popular across the island. By 1951, the Trinidad All Percussion Steel Orchestra – which represented Trinidad at the Festival of Britain in London – were playing chromatic pans and bass pans.

Modern pans are made from specially constructed steel drums, or use a 45-gallon (204-liter) oil drum. First, the head of the oil drum is pounded into a concave shape to stretch the steel. The areas that will be tuned to individual pitches are marked out with a cold chisel – which delineates the borders between notes – in a process known as 'grooving'.

The metal is tempered, and the drum barrel, or skirt, is cut to the required length, ranging from 14 centimeters (5 inches) for the highest tenor pans, and 8 centimeters (34 inches) for bass pans. The pan is tuned by hammering out hollows where the head was marked. Lower notes require a larger hollow, so bass pans may have only three or four pitches on each drum, whereas tenor or lead pans could have up to 29 notes. Playing the pan may result in a loss of true pitch if the surface is damaged, but a pan may be re-tuned or blended to regain its original tuning. After fine-tuning, the pan is covered with chrome or zinc to prevent rusting.

It is played with rubber-headed sticks, and the smaller drums are suspended on stands. As the sound of the pan has a short decay, it is usually played with a tremolo like a xylophone roll or a repeated rhythmic pattern to sustain the sound. The layout of pitches is not consecutive as on a piano or xylophone. Notes are arranged in concentric circles around the pan with adjacent notes a perfect fourth apart (D, G, C, F, etc.) reading clockwise.