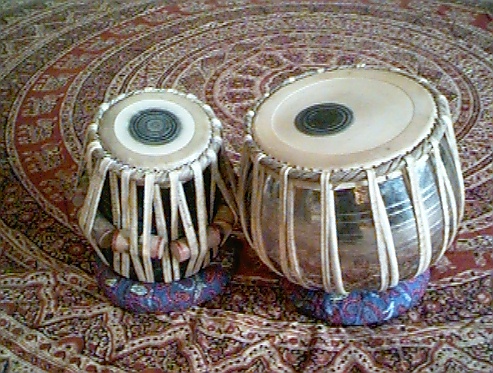 The tabla is a pair asymmetrical Indian drums tuned to different pitches and often used to accompany the sitar. The tabla are the principal percussion instruments of Indian / Hindustani classical music, as well as being commonly used in folk music and increasing in other forms of music around the world.

The left-hand drum, or bayan, is hemispherical, 11 inches in diameter across the membrane and 15 inches high, and may be made of iron, aluminum, copper, steel, or clay, though brass with a nickel or chrome plate is the most common material, It produces a deep sound. The right-hand drum, or dayan, is a tapering wooden cylinder, carved out of a solid piece of hardwood, 7 inches in diameter and also 15 inches high, and produces a higher sound.

The most striking characteristic of the tabla is a large black spot on each of the playing surfaces. This spot consists of a mixture of gum, soot, and iron filings and serves to give the drum a characteristic bell-like timbre.

The tabla are tuned to the tonic note of the rag (scale or melody) being played by the vocal or instrumental soloist. The drumhead is laced to the drum with a single long leather strip running in a 'W' formation between the top and bottom of the drum. Short wooden dowels are wedged under the leather strips on the dayan and hammered down towards the base or loosened to tune the drum. The rim of the bayan may be hammered to tighten the skin further.

The Indian tabla drums rose to prominence in the Delhi royal courts of the seventeenth and eighteenth centuries, but their roots stretch far back in time. There are sculptures of these instruments that date back thousands of years. Many believe that that tabla drums evolved from the mridang or pakhavaj.

The tabla produce a variety of distinct sounds called bols depending how they are struck. These bols are the elements of a highly developed drum language. New bols are formed by combining strokes; for example, 'na' on the dayan, combined with 'ghe' on the bayan, produces a new bol: 'dha'. These bols are strung together into complex patterns, both as pre-composed pieces, and in improvisation and are called 'taal'.