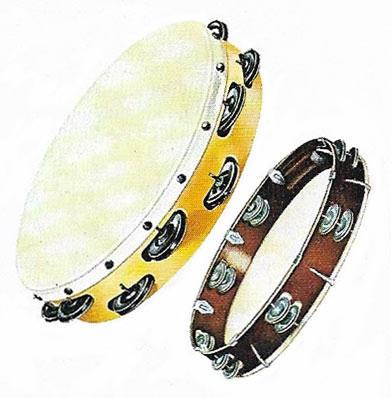 Tambourines combine the stretched membrane of drums with a jingle that has elements both of cymbals and of rattle instruments. The tambourine is an ancient percussion instrument of the frame drum family composed of a calfskin, parchment, or plastic head stretched over a round wooden hoop, 15–25 centimeters (6–10 inches) across and 5 centimeters (2 inches) deep, furnished with small metal disks like little cymbals, mounted singly or in pairs in openings in the hoop, and held in place with pins. It is commonly used in orchestral and folk music, especially in central and southern Europe. A tambourine without a head – known as a ching ring or jingle ring (schellenreif) – is often used in pop and Latin-American music.


History of the tambourine

The tambourine can be traced back to a number of ancient civilizations including those of India, Greece, China, Egypt, and Rome. It may be that the Crusaders introduced the instrument to Medieval Europe when they returned from the Middle East; it subsequently gained popularity among traveling minstrels. The tambourine began to take a prominent place in the music world during the eighteenth century when composers used it in their operas, however, it wasn't until the nineteenth century that the tambourine became more popular, appearing in Igor Stravinsky's ballet Petrushka, as well as in works by composers such as Berlioz.


How the tambourine is played

The tambourine can be struck with the flat palm, with a closed fist, or the knuckles. It can be rested on the knee or a soft-topped table and played with fingertips. It can also be shaken to rattle the jingles and create a tremolo effect. A thumb roll can be produced by rubbing the head with a moistened thumb tip to make the head shudder and the jingles vibrate.

Numerous pop, rock, and folk tunes make use of the tambourine. It appears on "Mr. Tambourine" by The Byrds, "Last Train To Clarksville" by The Monkees, and "California Dreamin'" by The Mamas and the Papas, to name a handful.