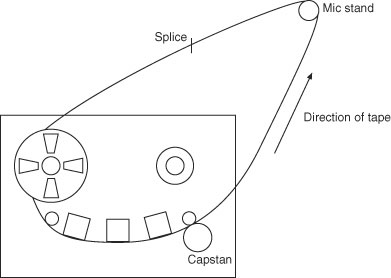 Old school tape-looping. Because a tape loop wouldn't fit inside a reel-to-reel recorder, the tape was often fed around a mike stand.

A tape loop is a piece of magnetic tape recorded and then cut and spliced to form a loop that continues to repeat the recording. It creates an echo effect or a continuous repetition of several seconds of audio. Before the age of digitized audio, a tape loop was the only way to have a sound repeat endlessly.

With a right-angled splice, the transition from one tape section to another would be instantaneous, but by using varying splice angles, the recordist could smooth out the transition. Tape splicing was an art form that required considerable dexterity and skill that could only be acquired through experience.

Tape loops were used as early as the mid-1940s when Frenchman Pierre Schaeffer was pioneering a new musical form called musique concrète which involved recording acoustic sounds to short lengths of recording tape, splicing them together, speeding them up and slowing them down, reversing them and otherwise manipulating them to create collages of sounds.