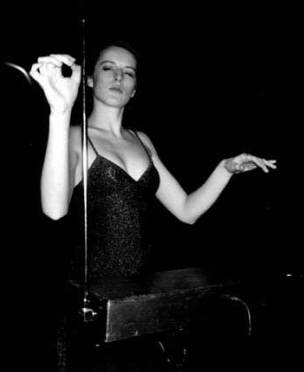 The theremin is one of the earliest examples of a purely electronic instrument, and the first designed to be played with no physical contact. It produces a tone that changes in pitch and dynamic level when the player moves his or her hands near its antenna and loop.

The theremin was invented in 1919 by the Russian cellist and physicist Leon Theremin. Growing out of research into proximity sensors, the theremin exploits the capacitance properties of the human body. Movements near two antennae mounted on the instrument cause changes in the audio signal. A similar phenomenon can be observed when someone moving near a radio or television alters the reception.

The theremin is a wooden cabinet, containing a loudspeaker facing the audience, from which protrude two antennae – a horizontal loop to the left and a vertical pole to the right. Movements of the left hand around the loop alter the volume of the sound, while the hand is used to control pitch, according to distance from a pole. A good sense of pitch and physical memory are prerequisites for playing the theremin. The instrument emits a continuous monophonic tone, similar in character to a violin.

The ethereal, otherworldly sounds of this strange instrument can be heard on some classic recordings, including Bernard Heremann's score for the 1951 science fiction movie The Day the Earth Stood Still and Led Zeppelin's live version of 'Whole Lotta Love'. Interestingly, The Beach Boys didn't use a theremin on 'Good Vibrations' (a common misconception) as none was available for the session. The trademark sound of that track was created by a similar instrument, the tannerin. Though no longer in production, the theremin has a loyal following of aficionados and DIY kits available.