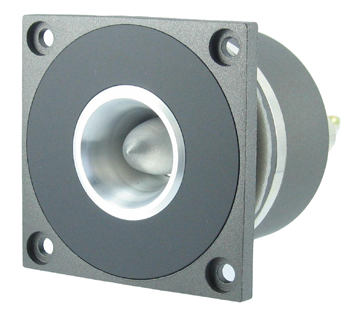 A tweeter is the highest frequency transducer of a multi-driver speaker system. Considered the opposite and complement to the woofer or lower frequency drivers, tweeters come in many different shapes, sizes, and styles. Some are simply very small versions of typical voice coil-based speakers, while others may use piezo elements or other more elaborate techniques.

Sometimes the high frequency driver in a speaker system isn't referred to as the tweeter, but instead a horn or, simply, a high frequency driver. This is generally only the case when a compression driver is mounted to a horn. The reason for this is historically that the compression driver/horn combination was used more for upper midrange frequencies and there was often still a device (or devices) more like a stereo system's tweeter with very small elements reproducing frequencies above that if they were needed. Quite often in large sound system PA applications this very high frequency reproduction was not utilized because it was deemed either unnecessary or too difficult to achieve in large venues. It could require a dozen or more small tweeters to keep up with the output of one good compression driver mounted to a horn, and even then the dispersion characteristics were radically different, which caused lots of phase and interference problems in some listening positions. Nowadays compression driver and horn technology has advanced to a degree that in large PA systems true tweeters can be avoided while achieving good fidelity overall. However in stereo systems and many near-field studio monitor systems, compression drivers and horns are used in favor of tweeters, which most listeners agree produce a softer and more pleasant sound, not to mention the potential for increased linearity at very high frequencies.