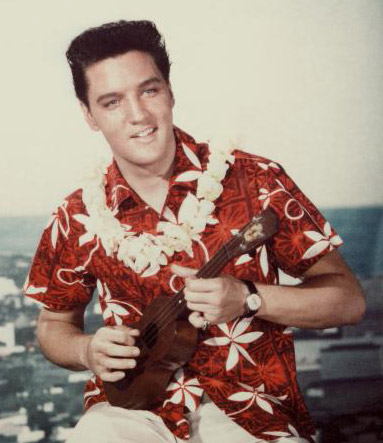 Elvis Presley with a ukulele.

A ukulele is a small four-stringed guitar associated with Hawaii but originally from Portugal. The name comes from the Hawaiian uk = "flea" and lele = "jumping"; "jumping little flea" said to be the nickname of Edward Putvis, a nineteenth century British officer, who popularized the instrument.


Origins of the ukulele

Three Portuguese instrument makers arrived in Hawaii in 1879, bringing with them native instruments including the cavaquinho, on which the ukulele is based. They opened shops selling their new instrument and it quickly caught on among the local population. It was often used at times of celebration. Very soon the ukulele took off in other states, as the craze for Hawaiian music swept across the United States in the early twentieth-century.

There are four sizes of ukulele: the soprano, the concert, the tenor, and the baritone. Each has four strings and a varying number of frets, from around 14 on the soprano to at least 22 on the baritone. All the instruments have four strings based on the intervals fourth-major third-fourth. There are not set pitches for each instrument, however, and players raise or lower their strings in order to play in a key that best accommodates their music.

In the 1930s and 1940s the ukulele's success spread to Europe. It became particularly successful as part of the British music-hall tradition, or variety acts that performed during the Second World War.

A wood called koa, which is native to Hawaii, is considered by many to be the finest available, in terms of its tonal qualities, for use in ukulele construction. It is certainly the most traditional.