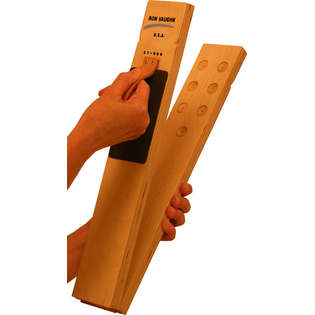 Many musical cultures have made use of wooden concussion sticks. Their history goes back to ancient Egypt and Mesopotamia, and they are played by the Aboriginal people of Australia.

This group of instruments includes pairs of sticks struck together like claves, 3 centimeters (1 inch) wide and 20 centimeters (8 inches) long), which are cylindrical wooden dowels widely used in Latin-American, pop, jazz, and classical music. They may also be wooden plates struck together like the Japanese yotsutake or hollowed-out shallow vessels like Spanish castanets.

The striking surfaces can be hinged or tied together, as in the orchestral whip or slapstick, which comprises two thin narrow narrow pieces of wood, hinged at one end. The whip is played with both hands – a crack is produced by closing the two pieces of wood smartly. The slapstick has a sprung hinge, so the top piece of wood bangs against the lower one when the instrument is flicked. It is a sound effect widely used in orchestral music since the early 19th century, as in Ravel's Piano Concerto in G (1931). It was also a popular instrument in theatre-pit bands and for drummers accompanying silent films.