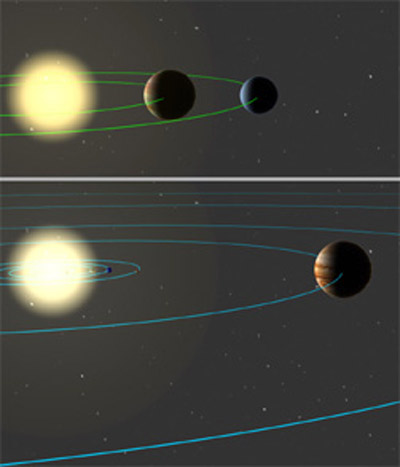 47 Ursae Majoris is one of the first Sun-like stars to be found to have a planet.1 This companion, 47 UMa b, was the first planet found orbiting another star that resembles Jupiter in both its mass and orbit. Its location around its central star is approximately the same as that of the asteroid belt in the Solar System. The discovery of a second planet in the 47 Ursae Majoris system, 47 UMa c, was announced in 2002 and subsequently confirmed by other groups.2

47 Ursae Majoris has been the target of three METI (Message to Extraterrestrial Intelligence) signals. The first, called the Teen Age Message, was sent by the 70-m Eupatoria Planetary Radar on September 3, 2001, and will reach at the star in July 2047. The second message, known as Cosmic Call 2, was sent by the same instrument on July 6, 2003, and will arrive in May 2049. Finally, 47 UMa was also the target of the first interstellar commercial when an advertisement for Doritos tortilla chips was beamed toward it by a radar array at the EISCAT European space station on the Norwegian island of Svalbard on June 12, 2008.