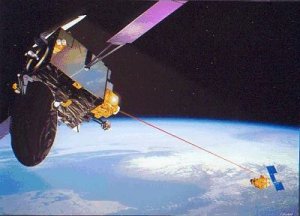 ARTEMIS (Advanced Relay Technology Mission) is the most advanced – and, at $850 million, most expensive – communications satellite ever developed by ESA (European Space Agency). ARTEMIS will support laser transmissions of voice and data as well as traditional radio frequency (RF) links and is the first non-American satellite to use ion propulsion for station-keeping. Positioned on the equator over central Africa, Artemis is supposed to become a key element of Europe's EGNOS satellite navigation system, broadcasting GPS-like navigation signals – a role that seemed threatened when a faulty launch in July 2001 placed the spacecraft in a much lower orbit than intended. However, following the partial launch failure, ESA devised a four-step recovery strategy that allowed ARTEMIS eventually to reach its correct geostationary position and function as originally planned for at least 10 years. The first two steps of this strategy involved several firings of the satellite's solid-propellant apogee kick motor to raise the apogee (highest point of the orbit) and then circularize the orbit at about 31,000 km, while the second two involved an unforeseen use of the ion engine for maneuvering into geostationary orbit. In January 2003, a final trim maneuver nudged ARTEMIS into its originally intended trajectory.