Fig 1. Stripes and spots work equally well as disruptive camouflage for many shy forest mammals. Blending in with patches of sunlight and dark vegetation, nocturnal animals such as the banded duiker and genet remain motionless and hidden by day and emerge to feed at night. The okapi, a relative of the giraffe, is a daytime feeder. The horizontal stripes imitate the Sun's rays as they penetrate the forest canopy. The hoofed mammals are smaller than their relatives in open habitats. A compact body and small or backward-pointing horns facilitate movement through tangled bushes. Bongo and duiker pass under low bushes with odd, crouching runs. Dimensions given for the chevrotain, okapi, duiker, and bongo are heights at the shoulder; for the genet, shrew, and squirrel, they are head and body length. 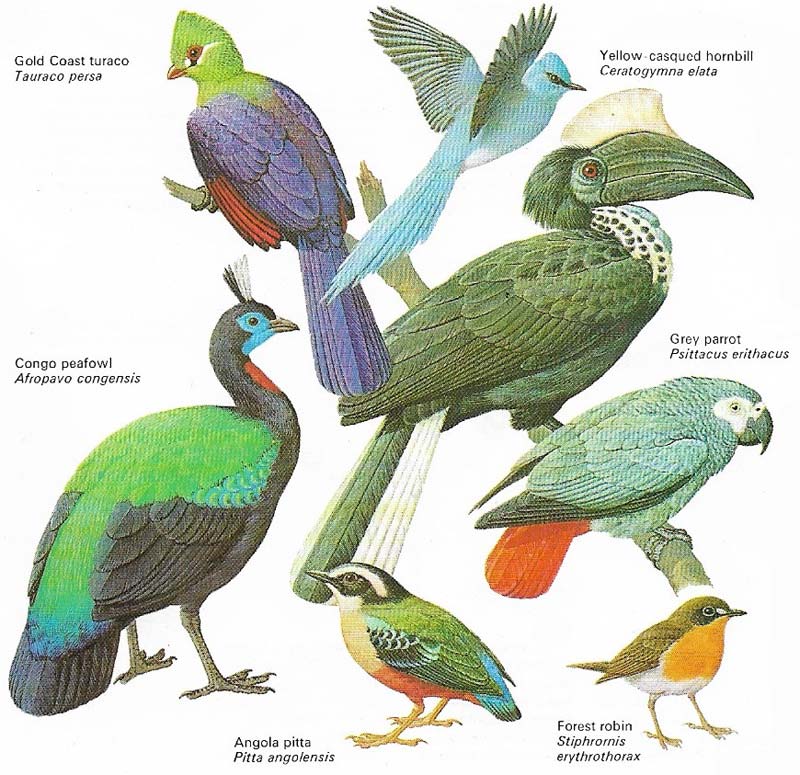 Fig 2. Rarely seen bit continuously heard, forest birds tend to leap among the trees rather than fly around the forest. High in the canopy the Gold Coast turaco and heavily built crested hornbill crash noisily from branch to branch in search of their staple diet of fruit, while the gray parrot is often seen in small flocks flying over the tops of the trees. Many of the smaller birds feed on insects and other small invertebrates. The blue fairy fly-catcher finds them in the trees, while the forest robin and Angolan pitta, aptly called the "jewel-thrush" because of its brilliant coloration, grub among the humus of the forest floor. The pitta is a particularly hard bird to detect as it has the ability to throw its voice like a ventriloquist. The Congo peafowl, a ground-dwelling bird related to the Asiatic peacock, was not discovered by Europeans until 1936. 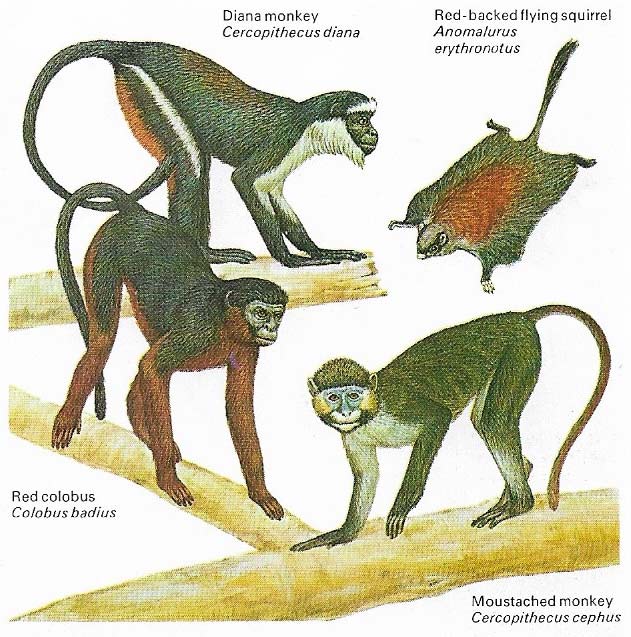 Fig 3. The monkeys and squirrels are some of the most agile of the tree-top inhabitants, moving cautiously among the branches or taking spectacular leaps from tree to tree. The red-backed or scaly-tailed flying squirrel runs up tree trunks, steadied by pointed scales on the underside of its tail, and then glides between trees on wings of skin between elbows and feet. The Diana and moustached monkeys use opposable thumbs to grip the branches and seem to crash their way haphazardly among the tree tops, unlike the red colobus which uses its hind legs to make precision jumps between branches.

Fig 4. Extremes of size are common in tropical rainforests. A warm, moist climate has allowed some invertebrates and cold-blooded vertebrates to become giants, while life in dense undergrowth has led to the evolution of dwarf, herbivorous mammals. The royal antelope stands only 30cm (12 in) at the shoulder and is the smallest antelope in the world. In contrast, the goliath frog, of deep forest pools, can grow up 80 cm (32 in) from nose to toe and weigh 15 kg (7 lb). It feeds on many small animals that include mice, rats, and lizards. On the forest floor, feeding on dead plant material, live the giant millipedes that grow up to 30 cm (12 in) in length. Also on the forest floor are the active predatory centipedes and the giant snails and flatworms. 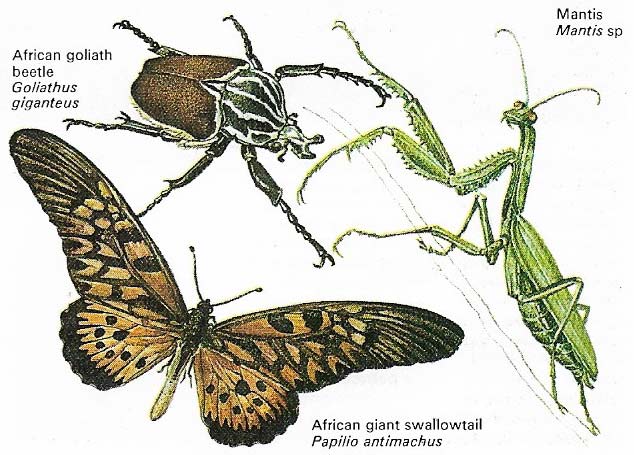 Fig 5. Tropical forest insects are the biggest in the world. The goliath beetle may grow up to 10 cm (4 in) long and the unique wings of the poisonous swallowtail span 25 cm (10 in). Some predatory kinds of mantis are large enough to feed on flying lizards.

A tropical forest is a deceptive place. No other form of vegetation is so complex or supports such a teeming variety of animals. Yet a visit there may reveal very little more than hosts of butterflies and an occasional bird. Since many of the animals are nocturnal, they stay hidden by day in their leafy sanctuary. Some remain in burrows in the ground litter and others seldom, or never, venture down from their arboreal homes. They are betrayed only by forest sounds; a distant crashing of monkeys through the foliage, for example, or the resounding shrieks of hornbills as they feed I the canopy.

Rainforests such as those of Africa are found in tropical regions where rain falls in heavy storms throughout the year. In such places temperatures average 27°C (81°F), varying little between night and day, and the air is moist and humid.

The vegetation of the rainforest, forever pushing upward toward the Sun, forms a series of distinct layers. On top, scattered tall trees or "emergent", many with flanged buttresses formed from root and trunk for support, reach above the thick-spread canopy layer. In the middle, smaller trees with long, oval crowns compete for narrow shafts of sunlight penetrating the foliage. Below, the smaller trees, palms, and shrubs exist in a twilight microclimate and merge into a relatively sparse ground layer of shrubs and tree seedlings. Matting the tree trunks are creepers and woody vines (lianas). Wherever the sunlight reaches the ground, herbs, shrubs, creepers, and tree seedlings are woven into a dense undergrowth.

Everywhere in the forest is an ever-growing, evergreen tangle of plant life. Species that grow on other plants, the epiphytic ferns, lichens, and orchids, lodge in sunny branches in the canopy of shady nooks farther down. Some rely on litter accumulating round their roots for food and moisture, while others absorb water through hanging roots. Strangler figs bring death to their host trees; germinating in the tree bark, they send down roots that eventually surround the trunk and cause it to rot away.

The African rainforests contain more than 7,000 species of evergreen and deciduous flowering plants and the virtual non-seasonal climate means that at any time of the year there is a supply of leaves, flowers, and fruits for the animals.


Life in the trees

The way in which the forest is formed into well-defined layers means that animals can live and feed in different habitats at different heights from the ground. Herbivores such as the colobus monkeys stay fairly rigidly within a particular layer, while predators, such as genets, are forced to make journeys from the ground to the canopy in search of bird, small mammal and insect prey.

The whole forest is a finely balanced ecosystem where the animals feed not only in different layers but also at different times. Monkeys and birds tend to be diurnal and most forest mammals nocturnal. At night the tiny bush babies such as the dwarf galago (Galagoides demidovii) emerge from their nests to search for flying insects (7) and fruit.

In the dense canopy the nocturnal and omnivorous Beecroft's tree hyrax (Dendrohyrax dorsalis) screams loudly as it scurries up and down the tree trunks. The red-backed flying squirrel (Anomalurus erythronotus) (5) glides between trees on bat-like wings of skin and the African linsang (Poiana richardsoni), strictly speaking a genet, emerges from its nest to hunt for insects and small vertebrates.

On the ground, night-browsing mammals such as the bushback (Tragelaphus scriptus) start to forage, while in the forest litter the African civet (Civettictis civetta) hunts for small rats, mice, and shrews.

At dawn the monkeys begin to feed. Distinguished by their long black-and-white coats, the colobus (Colobus polykomos) sit in groups of up to 20 animals, eating leaves and grooming each other. All the permanently arboreal monkeys are lightweight animals able to reach the leaves and fruit at the very end of slender branches.

In the forest canopy the sound of crashing branches may be caused by black-cheeked, white-nosed (Ceropithecus ascanius) or Diana monkeys (C. Diana) leaping between trees, or it may be noisy hornbills, turacos (Fig 2), ad wood-hoopoes, jumping from branch to branch in search of fruit.

In the middle layer of trees, troops of grey-cheeked mangabeys (Cercocebus albigena) feed on fruit. The ranges of the monkeys may overlap but each species uses a different kind of leaf or fruit as its main diet. The monkeys share the trees with arboreal snakes, chameleons, and frogs as well as invertebrates living in the soil around the epiphytic plants that grow on the trees.

Not all forest primates are arboreal. The vegetarian gorillas (Gorilla gorilla), although they can and do climb trees, prefer to pick leaves from ground vegetation. These animals, together with the forest elephants, buffalo, and okapi (Okapia johnstoni), are among the few large terrestrial mammals of the rainforest. More numerous are the squirrels, mice, rats, and tiny elephant shrews (Fig 1) that live in the ground vegetation. Beneath them a host of invertebrates carries on the job of breaking down the forest litter, thus releasing nutrients for the growing plants.