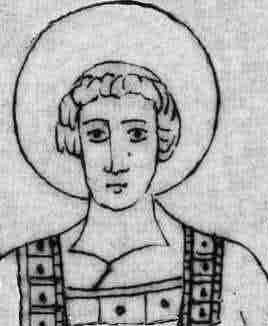 Alcuin was a leading intellectual of his time and, it is believed, the compiler of Propositiones ad acuendos juvenes ("Problems to Sharpen the Young"), one of the earliest collections of recreational math problems. According to David Singmaster and John Hadley: "The text contains 56 problems, including 9 to 11 major types of problem which appear for the first time, 2 major types which appear in the West for the first time and 3 novel variations of known problems... It has recently been realized that the river-crossing problems and the crossing-a-desert problem, which appear here for the first time, are probably the earliest known combinatorial problems."

Alcuin was born into a prominent family, which lived near the east coast of England. He was sent to York, where he became a pupil and, eventually, in 778, the headmaster, of Archbishop Ecgberht's School. (Ecgberht was the last person to have known the Venerable Bede). Alcuin built up a superb library and made the school one of the chief centers of learning in Europe. Its reputation became such that, in 781, Alcuin was invited to become master of Charlemagne's Palace School at Aachen and, effectively, Minister of Education for Charlemagne's Empire. He accepted and traveled to Aachen to a meeting of the leading scholars of the time. Subsequently, he was appointed head of Charlemagne's Palace School and there he developed the Carolingian minuscule, a clear script that became the basis of the way the letters of the present Roman alphabet are written.

Before leaving Aachen, Alcuin was responsible for the most precious of Carolingian codices, now called the Golden Gospels: a series of illuminated masterpieces written largely in gold, often on purple-colored vellum. The development of Carolingian minuscule had, indirectly, a major impact on the history of mathematics. It was a much more legible script than the old unspaced capital script previously in use, and, as a consequence, many mathematical works were freshly copied into this new script in the ninth century. Most of the works of the ancient Greek mathematicians that have survived did so because of this copying process. Not only was Alcuin headmaster of Charlemagne's Palace School at Aachen but he was also a personal friend of Charlemagne and became the teacher of his two sons. Alcuin lived in Aachen for two periods, from 782 to 790 and again from 793 to 796. In 796, he retired from Charlemagne's Palace School and became abbot of the Abbey of St Martin at Tours, where he and his monks continued to work with the Carolingian minuscule script.