Cross-sections of earthworm, an oligochaete and Nereis, a polychaete. Polychaetes are distinguished by their numerous chaetae and their side-feet or parapodia. Muscles activate the side-feet which can be used for locomotion. All sorts of variations occur in the shape and forms of chaete parapodia and cirri. 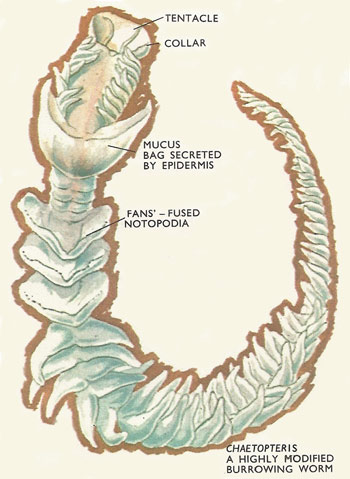 The most modified of all polychaetes is Chaetopteris which lives within the sand in a U-shaped parchment-like tube. Some of the parapodia are large and fan-shaped; they circulate water through the tube. Food particles are caught in a specially secreted mucus bag which is periodically swallowed. 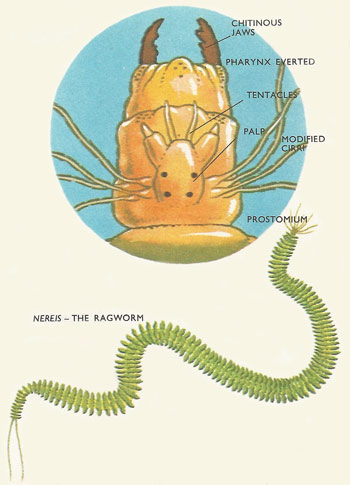 Nereis – the ragworm. The 'rags' are in fact the projecting parapodia. The head of the ragworm, is equipped with sensory organs and an eversible, jawed pharynx.

A terebellid worm, Aphrodite, and Tomopteris. 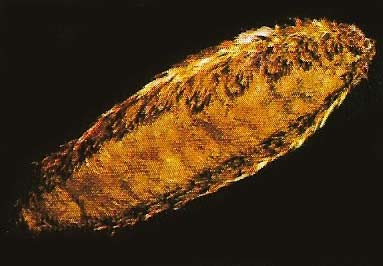 The sea mouse or Aphrodite (Aphrodita aculeate) is an unusual polychaete annelid worm found on the seabed just offshore in temperate waters where it feeds on dead animals. These creatures, which measure 7.5-15 cm (3-6 in) in length, are occasionally washed up on beaches after storms. Partly concealed among its iridescent hairs are dark, hollow spines thought to contain poison. If spines penetrate and break off in the skin they cause injury.

Sabella – a tube-dwelling worm. Beautiful feather-like tentacles, well equipped with cilia, emerge from the opening. The tube, made of mud, may be a foot long, keeping the tentacles well clear of the sea floor.

The annelids (Annelida) or true worms, is a phylum containing worms that have segmented bodies, coelomic body cavities, a central nervous system composed of cerebral ganglia from which branches extend along the lower part of the body and, typically, bristles called chaetae that project from the body wall. All the annelids have encircling grooves usually corresponding to internal partitions of the body. A digestive tube, nerves, and blood vessels run through the entire body, but each segment has its own set of internal organs.

Annelids are grouped into three classes, the Polychaeta, Oligochaeta, and Hirudinea. The polychaetes include the ringworms and are marine and have groups of long chaetae extending in bundles from extensions of the body called parapodia. The oligochaetes include the earthworms, which are terrestrial forms, and some small aquatic species. They have relatively few chaetae per segment and lack parapodia – features that distinguish them from the polychaetes. Members of the Hirudinea, otherwise known as leeches, are found mainly in freshwater. They lack chaetae and parapodia, but possess suckers at each end of the body.

Annelids form an important part of the diets of many animals.


Earthworms and other annelids

Best known of the annelid worms is the common earthworm. It displays the characteristic annelid features. Its body is divided into a large number of segments basically all identical in structure. For instance, each segment had its own pair of excretory organs – the nephridia – and each segment had its own nerve ganglion situated on the ventrally positioned nerve cord.

Embedded in pits actually within the ectoderm are chitinous bristles called chaetae. The earthworm has only four chaetae per segment. It belongs to the group of the annelid worms called the oligochaeta (Greek, olichos, few). Earthworms are the largest in size, and by far the most important of this group; the freshwater and shore-dwelling oligochaetes, are all small and inconspicuous.

Much more spectacular and diverse in appearance is the largest group of annelids – the polychaeta. Their name refers to the many chaetae they possess (Greek poly, many). An alternative name for them is bristleworms. Polychaete annelids are nearly all marine; in fact they are one of the most successful groups of marine invertebrates, possessing a divergence of structure and habit equalled only by molluscs and crustaceans. Unlike oligochaetes, polychaete worms are either male or female – they are not hermaphrodites.

The third and last group of the annelids is the leeches or hirudinea. Relatively few in number, the leeches are highly specialized creatures, adapted to a parasitic mode of life.

The chaetae or bristles of the polychaetes are not only more numerous than in the oligochaetes. Instead of being embedded in the skin, they arise in bunches from special leaflike prominences of the body wall called parapodia (side-feet). Each segment possesses a pair, one on each side of the body. Parapodia are well-displayed in one of the commonest shore-dwelling polychaetes, the ragworm (Nereis). Each individual parapodium consists of an upper half, the notopodium and a lower half, the neuropodium; both support their own bunch of chaetae. Above and below each parapodium are flaps of skin, the dorsal and the ventral cirrus.

Another feature in which polychaetes differ from oligochaetes is the formation of a distinct head. Earthworms have a segment or prostomium in front of the mouth but there are no features suggesting a concentration of sensory organs. In nereis, however, the prostomium is equipped with a pair of sensitive tentacles above and a pair of palps below. The next two segments have become fused together. Of all the segments of Nereis, they alone lack parapodia; but the cirri are still there – modified as sensitive tentacles.

Nereis is an example of an errant polychaete, a worm which may wander using its rows of parapodia as paddles for swimming or just undulating its body. Actually most of its time is spent in shallow burrows. The sharp bristles which at other times probably protect the creature now enable the animal to grip the smooth walls of its burrow, while gentle undulatory movements of the body cause water to flow in and out, carrying oxygen and possible indications of food in the vicinity. When small animals do pass the burrow, the first part of Nereis's gut (or pharynx) is turned inside out so that it extends from the burrow. On the end are two horny jaws for gripping the prey.

Another group of wandering polychaetes are the scale worms. The upper surface of these creatures appear to be covered with armor plates, causing them to resemble the molluscan chitons. The plates are called elytra and in fact are adaptations of the dorsal cirri; these structures are curved upwards and backwards on either side of the body and overlap on the top surface. Scale worms are usually small – rarely more than an inch or so in length. A notable exception however is the 'seamouse' (Aphrodite). Not at all like a worm in appearance this creature, which burrows in muds in off-shore waters, is 6 inches or so in length and two inches across. Its scales are not visible, for covering the upper surface is a dense coat of matted hairs. The hairs are really modified chaetae formed from the notopodium – the upper part of the parapodium. Short iridescent chaetae, projecting laterally, are used for locomotion. Safe in its burrow, water is continually pumped through the space between the back and the covering of hairs. The scales probably absorb oxygen.

Nereis, the ragworm, has been described as primarily a burrower. But, for reproductive purposes, a remarkable change takes place in its habits and its structures. As eggs and sperm develop in the bodies of female and male worms, the parapodia become larger and the spiny chaetae become flattened – almost oar-shaped. The colors of the worm (and they vary enormously with species) become richer and in the males eyes become enlarged. With the change complete the worms take to the open waters where eggs and sperm are liberated into the sea. This sexual stage of the Nereis is known as the heteronereis; formerly heteronereids were thought to be different animals altogether - and not surprisingly so.

In the paddleworms, parapodia and dorsal cirri are paddle-shaped all the time and the animals swim as well as crawl. A remarkable pelagic worm is Tomopteris. Its parapodia have developed into enormous lobes. On the head are two very large 'antennae'. In fact these are really parapodia much modified and supported by very long chaetae.

Distinct from the wanderers and shallow burrowers are the tube-making polychaetes – they actually construct their own homes. Appendages on the head are usually far more numerous than, for instance in Nereis, and greatly modified and increased in size. Tube-living worms are filter feeders. The tentacles projecting from the head have ciliated grooves down which food particles are washed into the mouth. They do not have the eversible pharynx or jaw of Neris and the parapodia are usually reduced in size.

The serpulid tube-dwellers make their shells of calcium carbonate, a substance which they secrete themselves. Some tubes are relatively straight but others so tightly coiled that they resemble the spiral shells of snails. Another feature of sabellids is that the peristomium – the fused segments forming the head – is produced into a collar which folds back over the outside of the tube and secretes reinforcing, hoop-shaped rings. One of the tentacles from the head has a swollen branch; when the animal withdraws into its tube the structure fits exactly over the mouth of the tube.

The sabellids make tubes by cementing sand and mud particles together. The tubes are either buried in the sand or attached to rocks. Sabella pavonina – the peacock-worm – is a magnificent sight. Its tube is a foot long and from the opening, brightly colored ciliated tentacles project. Terebellids make mud or sand tubes.

In addition to food-collecting tentacles, they have 3 pairs of gills behind the head, for respiration. The serpulids and sabellids have no special structure but respire over the whole body surface.

Of all polychaetes, the worm which most closely resembles the earthworm in appearance is Aremicols, the lugworm. The lugworm is a burrower and like the earthworm consumes vast quantities of mud from which organic food is obtained. Evidence of its activities are the conspicuous coiled worm casts on any sandy beach. Chaetae are small in the front and middle of the body, but absent altogether at the rear; the middle region, however, carries pairs of feathery gills on the dorsal surface. Sensory tentacles are absent; they would only be a hindrance in burrowing. But the pharynx can be extended. Instead of jaws the surface is coated with minute papillae which by adhesion enable the worm to pull itself forward through the sand.