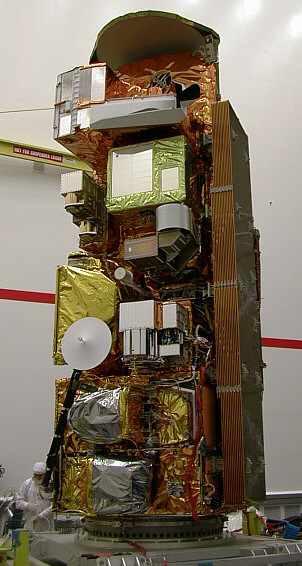 Aqua, also known as EOS PM, is the second satellite in NASA's EOS (Earth Observing System) and a sister craft to Terra. Flying three hours behind Terra in the same 705-km-high, polar orbit, Aqua maps Earth's entire surface every 16 days and will provide a six-year chronology of the planet and its processes. Its main job is to help investigate the link between water vapor, the most active greenhouse gas, and climate.

Three of Aqua's instruments – the Advanced Microwave Scanning Radiometer, the Moderate Resolution Imaging Spectroradiometer, and the Clouds' and the Earth's Radiant Energy System Detector – measure cloud cover and surface vegetation, temperatures across Earth's surface and in the atmosphere, humidity, and the flow of energy though the global system. A second package of three instruments – the Atmospheric Infrared Sounder, the Advanced Micro-wave Sounding Unit, and the Humidity Sounder for Brazil – track water as it cycles from Earth's surface through the atmosphere and back.

The first benefit of the mission is an improvement in daily weather forecasts: Aqua's data is at least a factor of two better than those used in current forecasts. Aqua was launched on May 4, 2000, by a Delta II from Vandenberg Air Force Base.