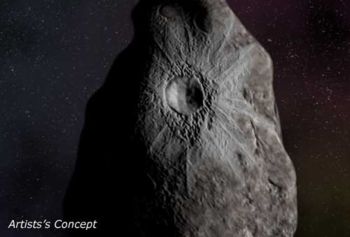 8405 Asbolus is a Centaur upon which a young crater-like feature was detected using the Hubble Space Telescope. The extreme brightness of this feature compared with the rest of the surface suggests that it was formed by an impact within the past 10 million years. The event that caused the crater may also have knocked Asbolus out of the Kuiper Belt.